The Rev. Miriam Schmidt, an ELCA missionary, is the pastor of Bratislava International Church in Bratislava, Slovakia, and the ELCA Young Adults in Global Mission regional coordinator for Central Europe. Here is an excerpt from her May newsletter. You can read the full letter at her blog. To support Miriam, or another of the ELCA’s over 200 missionaries in the global church, go to www.elca.org/missionarysponsorship. 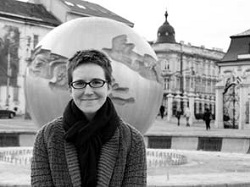 At the beginning of Lent, a couple from the Bratislava International Church approached me. They had been invited to the congregation by one of our regular assembly members. They had been worshiping for a while with us, though they had never come forward for communion. I found out they are a young, married couple, a couple looking for a religion, a faith to share that might hold their family in the years ahead. She is Slovak but was raised during the Communist period, and had never been baptized. He was born and raised in Iraq and grew up in a non-practicing Muslim household.

Now this couple found themselves attending the Bratislava International Church and talking to me at fellowship hour about what it would mean to baptized.

So we began meeting. Week after week we met, and by the end of February the couple was clear — they wanted to be baptized, and yes, at this year’s Easter Vigil. Our meetings were moving and challenging. They asked great questions about the Trinity, about the sacraments, about who baptismal sponsors might be. I loved getting to know these two 20-somethings who were actually interested in learning about the Christian faith they were preparing to enter.

The Easter Vigil was full of surprises: I had anticipated less than 30 in attendance and around 60 came, including multiple children. We overflowed the candlelit room we’d set up for the Vigil readings. The children danced with me as we sang “Oh Mary Don’t You Weep,” and they provided musical accompaniment to the outdoor reading of the Three Men and the Fiery Furnace, next to a real blazing fire, with the rain falling down on our heads.

Finally we came into the sanctuary and gathered around the font to baptize the couple that our assembly had been praying for throughout the Lenten season. I prayed the thanksgiving prayer, poured water over their heads, laid hands on them, and anointed them with a cross of oil. Just to remind us that baptism invites renewal, a dear 50-something member of our assembly affirmed her baptism that night as well.

The Spirit of God was surprisingly tangible, remaining with us as two new Christians took their first communion in a circle of people from Korea, Iran, Ghana, Slovakia, England, the USA, Denmark and Norway.

Next Post: The Central African Republic: What about the future? »

3 Responses to 'An inspiring baptism'