‘A person is a person through people’

Jordan Muller is part of the ELCA’s Young Adults in Global Mission (YAGM) program. He is spending a year in Estcourt, South Africa. The YAGM program is reliant on coordinators who facilitate the young adults’ ministry and provide mentoring and spiritual guidance. To support a YAGM coordinator, go to www.elca.org/missionarysponsorship. 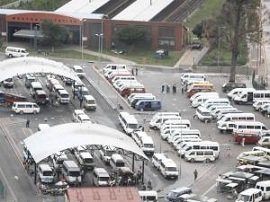 At a taxi rank, or terminal, there can be hundreds of minibus taxis waiting for passengers.

There are two things that I really struggle with when riding the mimibus taxis here. The first is that the taxi doesn’t depart until it is full so you never know when you will leave. The other problem I have is that they are always so hot! For some reason no one likes having windows open no matter how hot it gets so I often arrive at my destination feeling sweaty and gross.

Last week, when I was going from Estcourt to Pietermaritzburg, my tolerance for the taxis was maxing out. After 90 minutes of waiting, the taxi was full but for some reason the manager decided we should go in a different taxi so all 15 of us had to get out and move to another taxi. I had been in the back by a window which was great because then I could control how hot it was by me. However, upon moving to the other taxi I ended up being the last one to have to squeeze into the back row. I got to Pietermaritzburg and told Elise, another volunteer, that I don’t know how many more of those I’m going to be able to handle!  Then, right on cue, my return trip to Estcourt was very different.

Because there are so many taxis in one rank (or terminal), it can become confusing and difficult to find the one that is going where you need. On my way back to Estcourt we had just gotten on the interstate when an older woman a few rows ahead of me started asking about where the taxi was going. I couldn’t understand most of the conversation as it was in Zulu but I did hear her saying, “Tugela” several times, which is another hour past Estcourt. She was realizing, too late, that she had gotten on the wrong taxi.

She soon began to cry as she did not have enough money to then make the trip from Estcourt to Tugela. Without pause, a girl sitting next to her began asking everyone to put some money together for her. Through everyone’s donations the woman was given  more than enough to make the next leg of her journey.

I watched the whole thing in awe and humility. God knew that this was just the thing I needed to renew my spirit as frustration and annoyance had begun to take over.  “Umuntu ngumuntu ngabantu” is a Zulu expression meaning, “A person is a person through people.” In other words, we do not get where we are solely by ourselves. There are so many people around us that make us who we are and help us along the way. The spirit of Ubuntu filled that taxi as a group of strangers were willing to help another stranger for no benefit of their own. Such a small but awesome experience to be a part of and one I will not soon forget!

« Previous Post: Are you getting your daily dose of manna?