For the last four years, I’ve made the same walk on Fourth of July weekend. Each walk feeling as hot as any other before it. Shoes sticking to cracked Chicago concrete. Dots of melty black asphalt. Signs of streets deserving a little tender love, as my grandma called it.

These long walks on Douglas Boulevard in North Lawndale always have something to teach me about the past. In this all-Black neighborhood, it’s a street named after a white Illinois senator, slave owner and avid advocate for slavery. One of many dark legacies in a very American city.

For the last four summers, every July Fourth weekend I walked these streets. Because I am a youth worker. And the July Fourth weekend marks the final dress rehearsal for our youth-led community walks program. A youth job program of the organization My Block My Hood My City. A program that trains young people from the west side in how to tell the stories and history of their community. They lead myself and hundreds of guests through these same steps of North Lawndale civil rights history.

Each July Fourth weekend, walking past these iconic sites of old becomes a form of timeless therapy. A reminder of time shifting while the endemic remains all too similar.

The corner store pharmacy. Providing affordable medicine for a class in need.

A former Jewish synagogue and then Baptist church. A building that became the center of Martin Luther King Jr.’s organizing during his time in Chicago. Stone Stars of David intermixed with stained-glass crosses. An eternal center of religion and activism.

It was here that MLK organized a movement against the relegation of blacks to slums and ghettos in the city. With gentrification and segregation as prevalent now as ever before, it’s a movement to which Chicagoans of today can certainly relate.

Independence Day comes and goes. But so much remains the same.

Yet each year I still cherish my time in this space especially. This annual walk through the aged stone temple building brings visceral images to the imagination. You can almost taste 60 years ago. MLK speaking to a packed crowd of Black folks. Sweating in that Chicago heat. Folks taking significant time and significant risk to be in radical community with one another. Many of them as young as the high schoolers I work with today.

I cherish that time in that space, because it’s in that nostalgia that you feel the weight of the movement.

On July 4, 1777, our American ancestors were still struggling as slaves.

On July 4, 1877, our ancestors were new freedmen struggling to survive.

And almost 100 years after that MLK was leading our struggle for civil rights.

That struggle is in the bones of Black folk. It is in our ancestral DNA.

And where will we be on Independence Day 2065? With God’s grace, I hope to live to see it. I hope to see it and smile, as my ancestors are today watching over me as I walk these same streets. Mere footsteps on the long path to justice. Inches closer on the road to freedom.

It’s the inches that I contemplate. And it’s for the inches I celebrate. Not with a burst like fireworks and loud sparks. More like a quiet flame. That same flame I see in the eyes of our young folk. Those passionate for justice. The ones who lead the way. 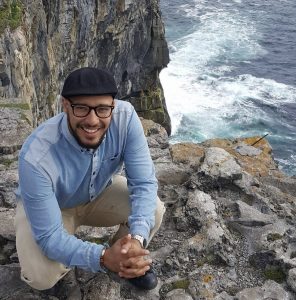 Nathaniel identifies as a multiracial activist, youth social worker, facilitator and teaching artist. Born and raised in Chicago, Nathaniel currently serves as director of youth development for the organization My Block My Hood My City. He has served in various leadership roles within the ELCA, including the Lutheran Youth Organization, the Multicultural Advisory Committee, the MYLE planning committee, and GLOCAL. He served as a multicultural consultant for the ELCA  and crafted an anti-bias curriculum for the 2015 youth gathering. Nathaniel believes radical change can happen in communities with the right tools and investment.