The Beauty and Tragedy of the Mestizaje Mindset by Kristina Diaz 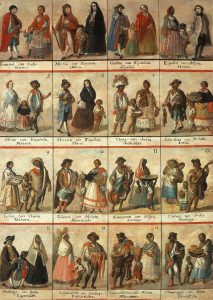 Happy National Hispanic Heritage Month! As we celebrate, I can’t help reflecting on what is being celebrated: independence, legacy and identity. As far as my own identity, I  grew up, like many Puerto Ricans, hearing the poems and songs that claim we all have a Black grandma hidden away somewhere. There was this shared idea among the people in my life that, no matter how hard we try to hide it, somewhere in our DNA we are all Black.

However, I wouldn’t attribute this to my other hispanic-identifying compatriots. We may share a similar history of colonial conquest, building nations on the backs of slaves, and migration that brings influences from all over the world, but that is where many of the similarities end. Still, in that shared common history exists the beauty and the tragedy of the mestizaje (“mixed race”) mentality.

Unlike in the United States, historically people in Latin America were encouraged to mix. A whole caste system was created to measure your identity based on how you were “mixing.”  Presently people may have forgotten the chart, but you’ll often hear them identify in a number of ways referring to its different levels before they will call themselves Black.

As a Latina woman, I have learned to embrace that I am Black, Indigenous and Puerto Rican. No matter how many times people look at me as if I’m crazy, being Latin@ means we are more than one thing. We are not exempt from the prejudices that come with these identities either; we just live with them differently. They show up in many ways: in sayings within the culture, in what is held as beautiful, in what counts as acceptable and in representation, to name a few. A good example of what I mean is telenovelas. I have never seen a telenovela in which the main characters are Black unless it’s a period piece. My husband will argue, “What about Celia?” I loved the biographical novela about the life of Cuban singer Celia Cruz, but I also know it exists only because she was famous. There are no novelas about modern-day Afro-Latine people living their best lives.

Not until we fill out the U.S. census form are we forced to look at these nuances. Some resist while others argue. My friend Janice shared her frustration over a plate of mofongo the other day: “I don’t know what to put down. I’m not black or white; I’m brown.” I looked at her and said, “You’re Indigenous in the same way that I am Indigenous and Black.” I’ll never forget the shock and awe on her face.

In a similar conversation my husband’s uncle said, “I’m not white, I’m Puerto Rican. The census just wants to divide us and bring over racist drama from the U.S.” I looked at him, confused. He is white. We may share the same national pride, but once we leave the island, accents aside, people will see him as white and me as ambiguously brown.

I know that the U.S. struggle with race is not our story, but that doesn’t mean we don’t have one of our own. So during this month of heritage and celebration, I invite you to explore with your loved ones the “both/ands” of your own identity.

Kristina Diaz has enjoyed a long career as a portrait photographer that has expanded to brand consulting as well as video and podcast editing/production in the past four years. She calls Dorado, Puerto Rico, home and is currently working on her first novel and a collection of short stories. In addition to writing, she is a fifth-generation oral tradition storyteller. Kristina is a third-generation cradle Lutheran from the Caribbean synod in Region 9. She currently serves on the board of the Asociaciacion de Ministerios Latinos of the ELCA as Communications Coordinator.