South Sudan: What It Means to Run for Safety 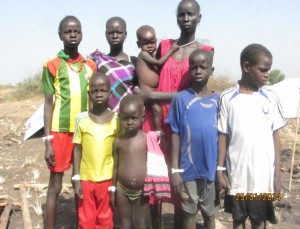 Since mid-December 2013, the world’s newest nation, South Sudan, has been the setting of a political crisis turned violent. According to a May 16, 2014, report from the United Nations, more than 1.3 million people have been displaced as a result of the armed fighting, and more than 4 million people are facing acute food insecurity.

Despite an agreement to cease hostilities on Jan. 23, 2014, the violence continues. One of the most fought-over towns is Malakal, the capital of oil-producing northern Upper Nile state. Many people in Malakal have been forced to flee to escape being caught between the warring parties.

Nyagnet Req, the mother of seven children, is one of those people. This is her story.

On Jan. 13, 2014, Nyagnet went to a nearby river to get water for her household. This was part of her daily routine. However, when she was returning home on that day, she witnessed first-hand the disaster as it hit her town. The town had been taken over by heavy armed fighting. Gun shots were flying as parents were running to gather their children. Nyagnet says she only has blurred memories of how fast she ran to collect her children and escape.

“It was the worst day of my life,” Nyagnet says.

Nyagnet and her three sons and four daughters were traveling on foot. After days of walking, they reached the Ethiopian border town, Matar. Matar is one of the entry points in the western region of Ethiopia.

On Jan. 23, 2014, Nyagnet and her family were placed in Lietchor camp. The camp has modest temporary shelters and basic sanitation facilities. Food and clean water are Nyagnet’s primary concerns.

Since Nyagnet and her children had to flee so quickly, she lost contact with her husband, who was working for the government in road construction at the time the clashes occurred in their town. She has no knowledge of where he is, and she has no way to let him know where she is.

Nyagnet’s story is similar to the stories of the many who have had to flee their homes as a result of the conflict in South Sudan. Many families had to leave on a moment’s notice, with no time to grab belongings or supplies, and family separation is one of the most prevalent results of the conflict.

Lutheran Disaster Response, in partnership with The Lutheran World Federation (LWF), is providing assistance to accommodate the 20,000 refugees at Lietchor camp. Boreholes are being drilled to construct a motorized water supply system, hygiene supplies are being distributed, and sanitation awareness programs are being implemented. In addition to these life-saving activities, we are working with LWF to provide agricultural livelihood restoration programs.

The months of conflict and the fear of returning home to nothing take a toll on families who have had to leave everything behind for their safety.  Lutheran Disaster Response has been present from the beginning, providing assistance within South Sudan and to refugees in Ethiopia, Uganda, Kenya and Chad. We will continue to be present and provide assistance where it is needed most, for as long as it is needed. Your gifts designated for the South Sudan Conflict Response will help assist those who have been directly impacted.

Who will separate us from the love of Christ? Will hardship, or distress, or persecution, or famine, or nakedness, or peril, or the sword? No, in all these things we are more than conquerors through him who loved us. Romans 8:35, 37