​On March 30, 2014, Liberia confirmed its first two cases in the recent Ebola epidemic. A little more than a year later, Liberia was officially declared Ebola-free on May 9, 2015, after 42 days of zero reported Ebola cases.

Day 42 is the magic number because it is double the timeframe of the virus’ incubation period of 21 days, which is the official criterion needed to declare that the human-to-human transmission of the virus is over. This is an enormous achievement for Liberia – a country that was reporting 300-400 new Ebola cases every week during the peak of the epidemic.

“The most incredible thing to me as I visited Liberia during the week they were declared Ebola-free is the hard work of the people of Liberia,” says Walker. “Everywhere they showed extreme vigilance. The directive to wash your hands and to have your temperature taken were measures that I am sure helped to curtail this disease. It was good to be with the people of the Lutheran Church in Liberia once again. I felt the absence of the usual hugs and handshakes, but I realize that this change of cultural practice had been necessary for survival.” 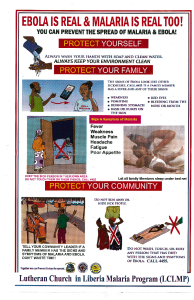 A poster from Liberia on Ebola prevention tips that was used to help curtail the outbreak.

While they could have felt defeated as the Ebola virus continued to spread throughout their country, Liberians did not give up – they fought against the disease with everything they had.

“Liberians were hard at work during the Ebola crisis, trying to save their way of life,” says the Rev. Themba Mkhabela, Global Mission regional representative for Madagascar, West/Central Africa. “Liberia would not be free of Ebola today if Liberians did not fight to save their country. The efforts of the international community also helped win the fight against Ebola, but the efforts of the international community would not have succeeded without the role played by volunteers, ordinary Liberians and the people of faith.”

One of those people of faith was Bishop D. Jensen Seyenkulo of the Lutheran Church in Liberia, who stayed in Liberia throughout the outbreak to provide support and serve as a trusted voice. Many Liberians were initially cautious of the government’s warnings about Ebola. Bishop Seyenkulo made many trips around the country in the midst of the epidemic to make sure people understood the seriousness of the situation and the care that was needed.

“I am reminded of an incident in one of the most devastated villages in the country where people refused to accept the county medical team or government officials,” says Bishop Seyenkulo. “The only person they were ready to listen to was their bishop. At the invitation of county officials, I dropped everything and drove there to reassure community members. At that point, the community opened itself to the medical help it needed.”

Thanks to the gifts given by people like you, Lutheran Disaster Response was able to assist in the fight against Ebola in Liberia when the outbreak was just beginning. We worked with our companion, Lutheran Church in Liberia, and partners, ACT Alliance and Global Health Ministries. Lutheran Disaster Response provided medical and disinfectant supplies, distributed food to people who were quarantined and helped ensure World Health Organization standards were met in the construction of an isolation center at Phebe Hospital. We also helped cover air-freight costs for shipments of personal protective equipment to Monrovia, Liberia’s capital. Your generosity allowed Lutheran Disaster Response to be the church and accompany our brothers and sisters in Liberia during this difficult time.

While we give thanks for Liberia being declared Ebola-free and celebrate with the people whose vigilance made it possible, we continue to pray for the people of Sierra Leone and Guinea who are still fighting against the Ebola outbreak. And even though Liberia is now Ebola-free, the work necessary to rebuild communities and health systems is just beginning. We will continue to walk with the people of Liberia as they begin the post-Ebola phase of recovery.

Nepal Earthquake: Krishna’s story | Responding to the severe flooding in the southern plains