Responding to the severe flooding in the southern plains

​Texas, Oklahoma and now Arkansas are experiencing severe flooding that started due to heavy rainfall and flash floods in the region during Memorial Day weekend. This has been the wettest May, or even month, on record for most of the region. In Texas, it is estimated that 35 trillion gallons of rain have fallen during the past month. Some cities in Texas have received at least four inches of rain for the past 25 consecutive days. At least 27 people have died due to the flooding in the U.S., and several more people are still missing. Normally dry riverbeds are flooded, leaving 4,000 houses damaged or destroyed and many streets and interstates submerged.

And the rain is still falling. 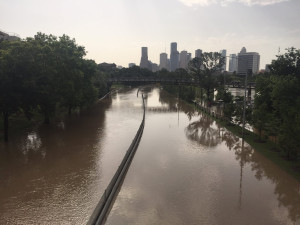 Flood waters cover Memorial Drive along Buffalo Bayou in Houston, Texas May 26, 2015 in a photo provided by the Harris County Flood Control District. Torrential rains have killed at least eight people in Texas and Oklahoma, including two in Houston where flooding turned streets into rivers and led to nearly 1,000 calls for help in the fourth-most populous U.S. city, officials said on Tuesday. REUTERS/Harris County Flood Control District/handout via Reuters – RTX1EN9D

Lutheran Disaster Response has been in contact with our disaster affiliates on the ground in the region, as well as with synods and congregations. We are keeping up-to-date on the situation and are assessing the immediate and long-term needs of those in the flooded areas. We will act in coordination with our network of social ministry organizations and synods to respond to these needs, and we will walk with those who have been affected through every phase of the disaster recovery process. We will stay long after the water recedes to assist in the rebuilding and recovery long-term response needs.

Please support Lutheran Disaster Response’s work in responding to the flooding in the southern plains by visiting the U.S. Spring Storms giving page.