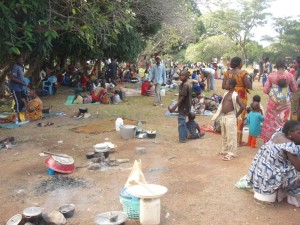 Approximately 2.2 million people in the Central African Republic are in need of humanitarian assistance due to insecurity and intense violence occurring in the country. The United Nations estimates that 935,000 of these people have been forced from their homes due to the severity of fighting in their area. Some of these people have found refuge in various locations, such as churches, and some of these people are living in the bush, running from fighting groups as they attack nearby villages.

For Fredd and his family, the violence in their area started on a late Friday morning. As the violence continued that night, he and his family decided to move into the bush away from the village to spend the night in a friend’s field about 10 kilometers away. As they traveled, they came across several other people who were also fleeing.

“A Muslim man came and told us that someone had informed the Seleka that all those who lived on the east side of the village were Christian and those to the west were Muslim, so the Seleka were planning to move into the east and search for people even in the bush,” Fredd says. “We decided to walk under the cover of darkness through the bush to the west side of town.”

Fredd and his family continued to walk to the next village since they could hear heavy gunfire from behind them. Within the group, there were several children, including three babies all under five months old. “The older children, including my eight-year-old daughter, all walked, while we carried the smaller ones,” Fredd says.

After walking through the next day and night, they decided to stop for a half hour to rest. Fredd’s wife then caught a high fever and she couldn’t walk. “We wrapped her in thick cloth, but she was still trembling very hard and complaining of cold,” Fredd says. “We knew she had malaria.”

Fredd started to worry about what would happen to his wife if she died. Would he be able to bury her, or would he have to leave her body behind and follow the rest of the group? The group made a small fire and put her feet by it and prayed. After a couple of hours, Fredd’s wife felt better and she could walk again.

“This was a miracle for me,” Fredd says. “She had been treated with prayer and a small fire. We walked for 12 days and finally made it to the clinic. Had it not been for the Muslim man, I believe this story would be different. I might not be telling this story.”

The Seleka rebel group is a largely Muslim alliance that seized the capital in March 2013. The group is now referred to as ex-Seleka rebels because the alliance has officially, but not actively nor effectively, disbanded. A mostly-Christian alliance, known as the anti-Balaka, formed in response to the Seleka rebel group and has also played a large role in attacks in the country. While both of these groups tend to be labeled by their religious affiliation, the fighting in the Central African Republic is not bound by the lines of religious war. The conflict in the country is a result of political power and economic grievances. Fredd’s story illustrates the understanding that peace cannot be achieved alone—an inter-faith response is needed.

Lutheran Disaster Response – International is working with Lutheran World Federation and our companion church, the Evangelical Lutheran Church of the Central African Republic (EELRCA), to provide food assistance to IDPs in the CAR. We are also working with our companion church to play a role in peace-building and reconciliation between Muslim and Christian communities in the country.

Your gifts allow us to continue to address the needs of the most vulnerable and walk with our brothers and sisters toward peace.