Ministering with immigrants in detention in New Jersey

The Rev. Ramon Collazo is a second-career pastor from Puerto Rico who ministers with immigrants in detention. It’s one way he channels his passion for immigration reform and raising awareness about human rights.

Quickly after finishing his time at United Lutheran Seminary (formerly, Luther Theological Seminary at Philadelphia), Collazo received a call to serve as mission developer for a new Synod Authorized Worshiping Community (SAWC) called Santa Isabel Ministry to Immigrants in Detention. This ministry focuses on providing spiritual care and hope for Puerto Rican and immigrant inmates at the Elizabeth Detention Center in New Jersey.

One mission starts another

The Elizabeth Detention Center is specifically designed for immigrants who either do not have proper identification of their citizenship or have committed a minor crime. It holds male and female citizens of multiple countries from Latin America, Europe and Asia. Collazo first became active in this  detention ministry when he was invited to provide prayer during a rally outside its walls. 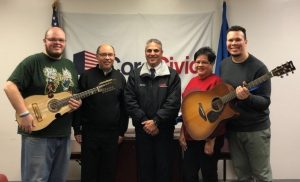 Rev. Ramon Collazo (shown second from left), with ministry partners who presented the Puerto Rican Christmastime music tradition of Parranda to inmates at the Elizabeth Detention Center in December 2018.

Collazo brings a unique voice to this ministry, which centers on doing intentional work to help and share the gospel with its immigrant community and other detainees. He hosts two worship services each week. Each service typically has 50 to 100 participants in worship, Bible study and prayer. Collazo also spends time offering prayer over specific requests or distributing rosaries and Bibles.

On December 27, 2018, Collazo gathered together a few ministry members to bring the Puerto Rican Christmastime music tradition of Parranda to the  detention center’s residents. “We gathered not in a porch, but in a conference room, with guitar and cuatro puertorriqueño (a guitar-like instrument) to practice. We began the Parranda to the dorms, where we surprised the men and women with ‘Feliz Navidad’ and other songs.” Collazo could feel the joy this activity created in the residents as well as a strong sense of unity where it would normally be absent during Christmastime in the  detention facility.

Collazo has learned much from hearing the stories of people who have tried to flee from oppression but then had to face the harsh reality of being forced to return to the situations from which they fled. He believes, “If we don’t watch the news and don’t put ourselves in their shoes, nothing will change.”

He points out that the reality is that change does not always happen from institutions, it happens through people who are willing to advocate and show empathy to those who are hurting. “It has to come from God, and it has to come from our hearts because we love God and are called to serve our neighbors.”

Touching the hearts of people is where we meet the authentic work of the gospel. Collazo is living this out wholeheartedly and invites fellow congregations to pray for those affected by immigration policies.

edited by Kris A. Mainellis, Program Director for Communication and Events, Congregational Vitality

The Congregational Vitality team shares stories and learning to inform and inspire and provides training information and guidance on vitality grants.