A common witness: Lutherans and Episcopalians team up in West Denver new start

Posted on August 9, 2019 by Congregational Vitality

Sunday morning is a lot busier these days at the corner of Raleigh Street and 5th Avenue in West Denver. For the past several years a new community of God, called Latino Ministry West Denver (Cristo Rey), has been growing in the church building at this intersection, in this changing neighborhood just south of busy 6th Avenue and west of major Interstate 25. Known to the neighborhood simply as Cristo Rey, the new-start congregation connects with its community and actively engages people to be in relationship with each other and Christ.

Cristo Rey arose after an unsuccessful attempt to create a new church by merging a shrinking Anglo congregation and a Latinx faith community. Although the merged congregation did not last, it helped point to a new direction. The church building retained an important community connection, serving as a popular place to host family celebrations and a home for community activities, including a growing Head Start preschool program. This connection strongly suggested that a Lutheran Latinx congregation could thrive.

The Rocky Mountain Synod and the New Start team (now called Congregational Vitality team) of the Evangelical Lutheran Church in America decided to close ALMC / Cristo Rey and try again, in a new way, with new leadership. The church closed at the end of July 2016, and then reopened the very next month, in August, as Latino Ministry West Denver (Cristo Rey), a Synodically Authorized Worshiping Community Exploration. But there was a twist – the new start’s developers are from the Episcopal Church. 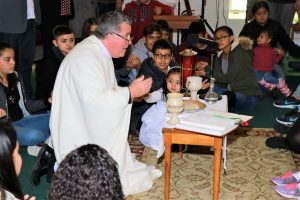 The Rev. Quirino “QC” Cornejo leads a communion liturgy for children at the Cristo Rey new start in West Denver.

Thanks to the full-communion partnership between the ELCA and the Episcopal Church, Cristo Rey’s leadership comprises an Episcopal priest, the Rev. Quirino “QC” Cornejo, and ministry partner Margarita Reyes, who is married to Cornejo. This dynamic duo embodies an ecumenical spirit, connecting people to the message of Jesus in new and welcoming ways.

One of the most compelling parts of this story is the background of these two leaders. Cornejo is an ex–Roman Catholic priest — now an Episcopal priest — leading a Lutheran congregation with the partnership of his ex–Roman Catholic, now-Episcopal wife.

Cornejo grew up a child of the Roman Catholic church in Mexico. He discovered his vocation early in life and committed himself to the priesthood at the age of 12. Ordained in the Catholic Church on May 25, 1991, in San Angelo, Texas, Cornejo served as a Catholic priest for 20 years in West Texas. Reyes, too, grew up in the Catholic Church and discovered her gift of evangelism as part of that tradition. She led adult and youth faith formation for years.

Cornejo and Reyes met in Texas. A short time later, “after 20 years of service as a Catholic priest, I began my discernment process to answer God’s call to form a family,” Cornejo said. Reyes and Cornejo moved to Colorado, got engaged and joined the Episcopal Church. They were married on March 18, 2016, and Cornejo was received as a priest in the Episcopal Church on June 18, 2016.

The Episcopal Church sharpened Cornejo’s sense of vocation and offered a way for the couple to continue to serve God as priest and evangelist and follow the call to form a Christian family. The couple have a daughter, Analey Sophia.

Just as Cornejo found a renewed sense of call in the Episcopal Church, so too did Reyes. In her ministry through Cristo Rey, she has focused her vocation using a new lens: “Now I call myself a Lutheran evangelist,” she quipped. “Our faith formation classes adhere to Lutheran theology, and I consider myself a strong advocate.”

Connecting in a new way

Cristo Rey relates to the neighborhood in a unique way as its two Episcopalian leaders serve in a Lutheran setting. Nearly 90 percent of the people in the community are of Latinx descent and many have strong Catholic roots. Worship is central, and Cornejo and Reyes are passionate about connecting the gifts and interests of the community and developing leaders through spiritual formation and outreach.

Reyes conducts faith-formation classes for adults, youth and families at 11:30 am each Sunday, and Cornejo leads worship and preaches at 12:30 pm. Families are drawn to Cristo Rey for traditional reasons — baptism, first communion, quinceañeras and Christian education. Once involved, they experience the joy and sense of purpose in belonging to this life-changing, thriving faith community. Changes range from Sunday morning priorities to how people interact with one other. Reyes recalled learning how one couple’s relationship had been transformed since the husband began treating his wife with more respect: “his wife thanks QC every time she sees him!”

Invested in the community

From its beginning, the people of Cristo Rey have impacted their community in a positive way. As the new start began to reach out to the surrounding community, Cornejo and other leaders noticed changes taking place in the neighborhood. “We’ve been building relationships. When I first started here, we had car break-ins in the parking lot four times in one month, and even a car that was stolen was hidden at the back of the church building.”

Now, the people look out for each other and are invested in the ministries of the church. The congregation reaches out to the community with Thanksgiving dinners and a Christmas Giving Tree. Recently, they partnered with a nearby larger Lutheran congregation to host a community dinner for the neighborhood.

The Latino Ministry West Denver (Cristo Rey) began with three people but now has grown to more than 100 people (45 families) in one year, and it is still flourishing. Cornejo believes it will move from a SAWC to an organized congregation most likely within another year.

Ministries such as Cristo Rey are taking off across the country as a result of relationships nurtured between synods and the ELCA churchwide office, as well as ecumenical connections with full-communion partners.

The involvement of the ELCA’s Congregational Vitality team with the REDIL (Red Ecumenica para el Desarollo de Iglesias Latinas) Latinx ecumenical network was essential to finding Cornejo and Reyes to lead Cristo Rey. The REDIL network is a partnership among the ELCA, Episcopal Church, Presbyterian Church (USA), United Church of Christ, Disciples of Christ, and Reformed Church in America.

Cornejo and Reyes are inviting others to look at life in a new way. These two leaders embody an evangelistic emphasis with an ecumenical spirit, and that’s exactly what attracts the community and connects people to the message of Jesus. They are setting a powerful example of how people from differing denominations and traditions can come together to grow in relationship with Christ and make a difference in the world, in common witness.

Next Post: Ministering with immigrants in detention in New Jersey »