Safe Drinking Water for All Californians 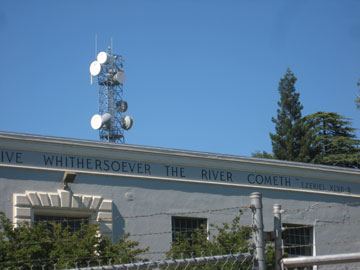 The Sacramento Water Treatment Plant by the confluence of the Sacramento and American Rivers. Photo courtesy of Mark Carlson.

In California, a couple of well-known sayings are imprinted in the minds of those who care about water.  The most famous is attributed to Mark Twain: “Whiskey is for drinking, water is for fighting over.”

In the Central Valley, whose rich productivity is supported by federal dams such as Trinity and Shasta, signs along highways proclaim a California truth: “Food grows where water flows.”  My favorite is the passage from Ezekiel 47:9, engraved on the masonry over the Sacramento water treatment plant near the confluence of the American and Sacramento Rivers: “Everything shall live whithersoever the river cometh.”

A couple of weeks ago, a Southern California Lutheran youth group rafted the Trinity River, a tributary of the embattled Klamath River, in the far north part of the state.  A portion of the coastal Trinity is diverted over into the Central Valley to the farms and cities far to the south. While rainfall and snowpack are abundant this year, three years of severe drought contributed to cuts in water deliveries, fallowed fields, dead orchards, unemployed farmworkers, suspended commercial salmon fishing, and highway signs of a more partisan and demonizing nature.

Yet even now that our rivers and reservoirs are full, there are more than 250,000 mostly low-income people in the Central Valley who lack water safe enough for drinking, bathing and washing.  Among that group are the men and women who pick and process the fruits and vegetables that end up in our grocery stores and on our tables. There are about 300 projects, at an estimated $400 million, on the waiting list for the federal Drinking Water Revolving Fund to address severe contamination in such disadvantaged California communities (compared with about $35 million available each of the last two years).

In addition, fragile agreements for water rights to the Klamath and San Joaquin Rivers, reached after a generation of litigation, are threatened by possible federal budget cuts that could ignite a new round of courtroom conflict.

Through history and by collective will and difficult compromises, the federal government has been a primary partner and stakeholder in working with state, local, and tribal governments and private interests in promoting what remains the elusive goal of safe, sufficient, sustainable water for all – farms, fish, people and healthy, productive ecosystems that all thrive “whithersoever the river cometh.”