Virus fears and viral fears: Standing with, not targeting, people

By the Rev. Amy E. Reumann, ELCA Director of Advocacy

This week my daughter came to me, shaken. “Mom,” she said, “There’s a video of a Chinese woman getting attacked because people are blaming HER for the coronavirus. They kept beating her and only one person tried to help!” Her voice conveyed anguish and outrage and no small amount of fear at this display of brutality. 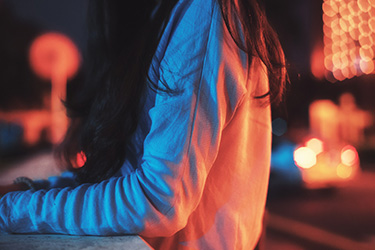 As our nation responds to COVID-19 with public health measures to test and contain the outbreak, we are also confronted by an outbreak of xenophobic attacks on Asian Americans, adults and children, with reports of similar aggressions around the world. These attacks on individuals, Asian and Pacific Islander communities and their businesses are a tragic extension of the fear and misinformation regarding the origins and spread of the virus.

They are also yet another manifestation of the viral racism that infects our body politic and, as put in an opening question by theologian Howard Thurman to his classic book, Jesus and the Disinherited, the body of Christ in the United States.

“Why is it that Christianity seems impotent to deal radically, and therefore effectively, with the issues of discrimination and injustice on the basis of race, religion and national origin? “

Targeting populations based on racial or ethnic origin is not new in U.S. history, especially in times of national instability. My daughter has learned in school about the Chinese Exclusion Act, the first significant law restricting immigration into the United States, and about Japanese American internment camps, the forced relocation by the U.S. government of thousands of Japanese Americans to detention camps during World War II. We have recently discussed over the dinner table Trump administration actions to make it easier to deport Lao and Hmong community members despite the sacrifices and solidarity of these refugees during the Viet Nam war.

But the video startled and brought home to her how close xenophobia is to the surface of everyday life in a new and frightening way.

Thurman’s book challenged the church in 1949 and still does today, insisting we reflect on the depth of our hunger and thirst for justice to address racism and religious discrimination in church and society. 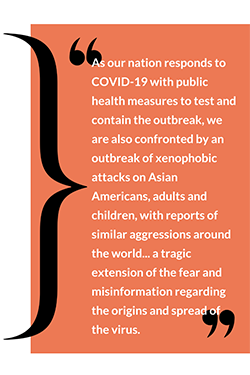 Thurman explores the life-changing message of Jesus for “those who stand, at a moment in human history, with their backs against a wall.” He contends that those who have been driven to the edge, dehumanized, degraded and denied basic dignity are Jesus’ primary audience. They are also the ones who can apprehend God’s “liberating spirituality” rooted in the religion of Jesus and an emancipatory way of being.

Thurman probes this spiritual resilience as developed through the suffering and beauty of the African American experience. Rooted in the presence and power of God who sides with the oppressed, this emancipatory faith provided sustenance during the atrocities inflicted by whites on enslaved African Americans and strength through the Jim Crow era.

To all whose backs are to the wall God offers this same liberating spirituality and calls for the church to stand alongside them.

Thurman mourns that the church, called to be in solidarity with those with their backs to the wall, often fails or falters. Long before Martin Luther King Jr.’s Letter From Birmingham Jail, Thurman took on “conventional” Christianity as “muffled, confused and vague,” more concerned with respectability than siding with those who are persecuted, weak and in need of defense.

Certainty in times of uncertainty

He has a word for us today, when there still are so many with their backs to the wall, experiencing persecution and in need of the church’s accompaniment, solidarity and advocacy. In times of national uncertainty, with all the unknowns about COVID-19 spread, there are a few things about which we can be certain.

That our prayers for God’s power, protection and presence are with those on the front lines of public health leadership and those who are isolated, sick or fearful.

That our nation has an essential role to play in public policy decisions that shape the health, security and well-being of people, throughout this country and the world, and that our vigilance and advocacy are required to hold our leaders accountable.

That as the ELCA we will not stand by when people are scapegoated, attacked or targeted based on race or ethnicity, which today means solidarity and presence with Asian and Pacific Americans and their communities.

That in Lent God invites us to renewal of faith and life, and at this moment of fear and uncertainty the church is charged with witnessing to a liberating spirituality that includes repentance, resistance and hope.

« Previous Post: ELCA partners with census for neighbor and ourselves