ELCA partners with census for neighbor and ourselves 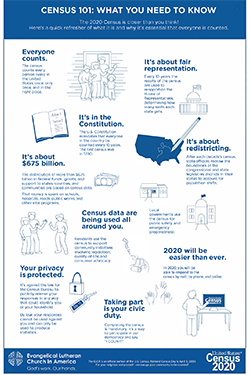 Our communities are significantly shaped by census data, and Census 2020 will update these numbers for the first time in 10 years. The ELCA is an official partner of the 2020 Census to encourage the most accurate count possible.

“Funding for over 100 federal programs, many of which combat poverty and hunger and support people in need, are distributed based on population,” says the Rev. Amy E. Reumann, Director of ELCA Advocacy. “An accurate count ensures that resources more justly go where they are needed most. It is also critical for representation in the political process as census information determines electoral maps.”

Undercounting is a significant issue among groups which benefit most from anti-poverty programs and from greater representation in decision-making. “Hard to count” individuals in census experience include persons residing in rural areas, young children, LGBTQIA persons, people experiencing homelessness, people who do not speak English, indigenous peoples and racial and ethnic minorities. The Census aims to count everyone regardless of immigration status, and as a result of the U.S. Supreme Court ruling, there will not be a question about citizenship status on the 2020 Census. 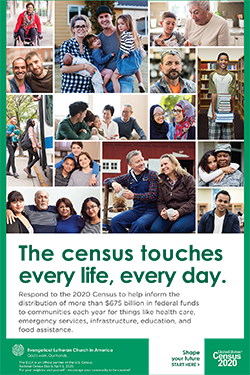 Posters placed in your congregation’s common areas and social ministry locations can raise awareness and encourage all to follow-up when their invitation to complete the census arrives by National Census Day on April 1, 2020. A toolkit with additional tools and bulletin inserts as well as the posters can be downloaded from the “Civic Engagement” tab at ELCA.org/resources/advocacy.

People underrepresented in previous census counts are not strangers. They are part of our congregations and communities. As we work toward a just world where all are fed, for your neighbor and yourself – encourage your community to be counted!

Next Post: Virus fears and viral fears: Standing with, not targeting, people »