The Generation Equality Forum concluded with concrete commitments to advance parity by 2026: The Generation Equality Forum took place in Paris from 30 June to 2 July 2021. The Forum was co-hosted by France and Mexico and convened by UN Women, in partnership with civil society and youth representatives. Nearly 50,000 people participated in a mainly virtual format to take stock and rapidly accelerate progress towards gender equality, as outlined in the landmark 1995 Beijing Declaration and Platform for Action. Close to $40 billion was pledged in new investments from governments, the private sector, civil society and others to help fund a new global five-year action plan to accelerate gender parity by 2026. The Forum launched a Global Acceleration Plan for Gender Equality designed by six Action Coalitions, as well as a Compact on Women, Peace and Security and Humanitarian Action. New gender equality initiatives focused on health, sports, culture, and education was also announced. UN Women will oversee the implementation of the 5-year action plan and the commitments made.

As Lutherans, we had delegates actively participate virtually, and joined over 30 global and regional faith actors in a joint communique that we turned into a video message. In addition, the Lutheran World Federation made commitments to the Action Coalition on Gender-Based Violence and pledged to accelerate efforts to prevent and respond to gender-based violence in church and society. LOWC’s Christine Mangale and LWF’s Sikhonzile Ndlovu led the Lutheran engagement and delegation to the Forum. 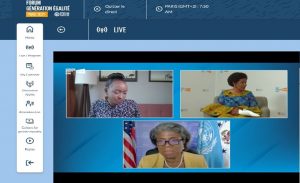 Israel-Palestine concerns conveyed to Biden Administration officials: In June LOWC Director Dennis Frado was able to attend two conference calls organized by Churches for Middle East Peace (CMEP) with Biden Administration officials at the White House and with the US Agency for International Development. As these were among the first meetings with the Administration on Israeli-Palestine issues, the CMEP representatives took the occasions to raise a number of matters that had been communicated by their heads of churches and organization in March. Particular attention was drawn to the need for US bilateral assistance to the West Bank and Gaza to be re-started and increased, especially given the additional humanitarian needs in Gaza because of the intensified conflict between Israel and Hamas in May. Appreciation was expressed for the Administration’s efforts to support the recent truce but called on the White House to be more active and vocal in urging Israel to halt home demolitions, seizure of Palestinian homes and land and settler violence against Palestinians.

1. The Legislature voted to make “Opportunity Grants” permanent, funneling up to $60 a year (statewide) to public schools with high percentages of low-income students and students learning English.

The fourth bill, which will likely be take up next year in the second year of the state’s legislative session, will require registration (and training) before the purchase of firearms. The bill has passed the State Senate but has yet to be taken up by the House.

We held our annual “Day at the Capitol” virtually this year.

Special Session: Negotiations on the 13 spending bills continued through all three weeks of special session. Hideously long “debates” dominated in the House as a handful of House minority members filibustered several bills. Although all budget bills were passed, the legislature came within hours of not finishing before the new fiscal year.

Clean Energy: The Commerce/Energy bill included the longest “debate” at roughly 25 hours. It passed 70-60 in the House and 60-5 in the Senate.

The Budget crosses the finish line: Many THANK YOUs to our network for their budget advocacy here in Ohio. In January, we set out to stop tax cuts, improve a school funding formula, and address housing and hunger here in Ohio. Here is a quick rundown:

Join us on July 19th at 3:30 pm as we discuss the budget with the Ohio Council of Churches. Register.

As the General Assembly recessed in late June, LAMPa celebrated a $3 million increase in the state’s major anti-hunger programs and an extra $300 million in basic education funding, $100 million of which is targeted to the poorest schools. 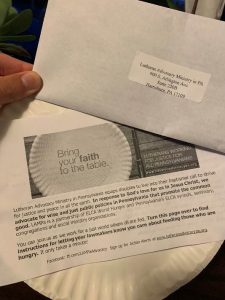 “Our hunger advocates did a tremendous job in sharing stories of the need they continue to see and convincing the legislature that we could not go back to pre-pandemic funding levels,” said LAMPa Director Tracey DePasquale.

LAMPa also advocated for accelerating the process of closing one of the largest school funding equity gaps in the country through LevelUp PA, which garnered bipartisan support to win passage as part of an historic $416 million increase in public education funding.

Although supportive of bipartisan elections reforms sought by county officials, LAMPa applauded the governor’s veto of legislation that included those reforms but imposed other measures that would have created barriers to voting and undone reforms passed in 2019. LAMPa co-hosted a webinar on the legislation in early June.

Also in June, Hunger Advocacy Fellow Larry Herrold participated in a virtual advocacy day with partners seeking a path to 100% renewable energy and attended the Upper Susquehanna Synod Assembly after having assembled kits for the 200 voting members. The kits included letters to legislators asking for increases to the Pa. Agricultural Surplus System and the State Food Purchase Program, as well as information about advocating with LAMPa. He delivered completed letters to lawmakers in time for the passage of the state budget. 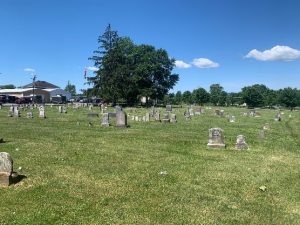 Herrold traveled to Gettysburg to conduct research on Lincoln Cemetery, an African American cemetery in use since the Civil War. This research is part of LAMPa’s ongoing focus on the land that connects us.

Both Herrold and DePasquale attended a meeting of the Upper Susquehanna Synod Advocacy Team in July. DePasquale spoke at a Capitol press conference on health care as a factor in hunger and poverty as legislation was reintroduced regarding surprise medical bills and prescription drug prices.

As Herrold’s fellowship concludes, he is working to finish long-term projects, including the organization of digitally photographed archival material and the refinement of databases of new and existing advocates and service ministries.

In August, Herrold will help lead an in-person “MinistryLab” along with Lutheran Disaster Response and creation-justice advocates in Northeastern Pennsylvania Synod. The lab aims to engage young adults in the ministry of the ELCA. Both Herrold and DePasquale are working with Lutherans Restoring Creation to build or strengthen green teams in every synod as they prepare for the Season of Creation and the launch of ELCA advocacy priorities on climate, just transition, and sustainable agriculture.

The Texas Legislature is being called back in for a 30-day called special session beginning July 8 to address several “extraordinary items,” most notably bills that would suppress the votes of Texas voters.

Texas Impact is sponsoring a “Let My People Vote” campaign featuring a liturgical guide for local congregations and a rally at the Capitol July 19 in partnership with the League of Women Voters, the NAACP, and La Voz de la Comunidad (LULAC). Bishop Sue Briner, ELCA Southwestern Texas Synod, will be a featured speaker.

Texas Impact is mobilizing Texans of faith through the Rapid Response members, Legislative Engagement Groups and the Weekly Witness program.

On July 1, the new bills on which VICPP led the advocacy became law. The death penalty was abolished, thus saving the lives of two men on death row. Virginia became the first state in the south to abolish the death penalty. A new healthcare benefit was added providing prenatal care to 9000 undocumented women. VICPP is now working to get the word out in immigrant communities about this new benefit. Approximately 30,000 home healthcare workers now have access to paid sick days. In next year’s General Assembly (beginning in January), VICPP hopes Virginia will adopt a broader paid sick day standard so that all Virginia workers will have access to five paid sick days a year.

On August 2, the General Assembly will reconvene for a special session to consider how best to use the federal dollars coming to Virginia from the American Rescue Plan Act. VICPP will be partnering with other low-income family advocates to push for uses that focus on helping the most vulnerable in the commonwealth. To join this effort, make sure you are on VICPP’s email action list. Sign-up at www.virginiainterfaithcenter.org. Also, if your congregation does not have a congregational liaison who works with VICPP, recruit someone for this important role and connect with Dora@virginiainterfaithcenter.org.

Faithful Vaccines: Eleven faith leaders from across Washington State participated in a joint effort to encourage people of faith to get vaccinated against COVID-19. We are excited to share their work both in this video – Faith Leaders Speak: Don’t Hesitate – Vaccinate! – as well as individual videos on our Vaccine Toolkit, in English and Spanish. We wish our partners across the country success in getting their communities vaccinated as well since our health outcomes are tied to one another. 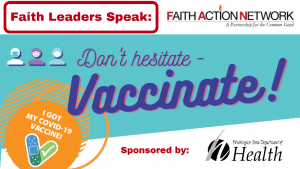 FAN is Hiring! As Faith Action Network celebrates our tenth birthday this year, we continue to move faithfully forward as Co-Director, Rev. Paul Benz, retires at the end of 2021 and current Co-Director, Elise DeGooyer, becomes FAN’s Executive Director. FAN’s public policy work, led by Paul these past 10 years, will continue under the leadership of a Policy Engagement Director. If you know good candidates in Washington State, please send them our job description!

Statewide Policy: We are in the interim period after the legislative session ended this spring, but there is still work to be done in implementing bills that have passed. FAN is partnering with Earth Ministry to encourage Governor Inslee to sign an executive order for Clean Cars by 2030, a bill that had passed the legislature with broad community support which Governor Inslee partially vetoed. We are hoping to move this legislation forward to stay on-track with the Governor’s and the President’s climate goals as well as the Paris Climate Accord.

Congressional Policy: We are encouraging advocates to urge their House members to ask leadership to bring the HR 40 Reparations bill up for a vote. FAN cosponsored the Roadmap to Freedom legislation to pave a just and compassionate way forward for immigration reform, and we have requested a meeting with Senators Murray and Cantwell to discuss this. We continue to monitor the Justice in Policing Act to make sure it includes the elimination of qualified immunity.

Juvenile Justice: Hunger Advocacy Fellow Kyle Minden led a full Raise the Age coalition meeting and a small group to discuss creating a steering committee to speak for the coalition. We are now in the phase of strategizing long-term educational goals because returning 17-year-old youth to the juvenile justice system did not make it into the Wisconsin State Budget.

Advocacy Trainings: The director gave a Zoom consultation on building an advocacy ministry to leaders of a congregation in the East Central Synod.

Youth: In the Greater Milwaukee Synod, we led a training on the basics about advocacy to youth as part of their congregation’s at-home mission trip, connecting their visits to places such as food pantries, with advocacy.

Advocacy Training with youth at St. Matthew’s Lutheran Church, Wauwatosa: We also held our second meeting with a handful of leaders from around the state to discuss possible future advocacy events for youth. We have had contact with representatives from all six synods that LOPPW works with.

Immigration: Staff gave a blessing to a group marching for Dreamers and a return to fairness in obtaining Wisconsin drivers licenses and met the marchers at the end of the march.