“Action to counter degradation, especially within this decade, is essential to the future of our children and our children’s children. Time is very short.”

– A Social Statement: Caring for Creation: Vision, Hope, and Justice

The village of Newtok, Alaska, a Yupik Eskimo community of 450 people, is in a battle for survival.  Time is working against them as the village faces certain annihilation from a slow-moving climate disaster.On December 6, 2017, residents of this village shared  brought their stories to the Wilson Center in Washington, DC where they served on a panel entitled, “Fleeing Change: Relocating the Village of Newtok, Alaska.”

The residents delivered vivid testimonies. They told of the village losing 70 feet of shoreline per year; people having to perform sleep watch duty because a shift in winds could have devastating consequences in minutes; floods that produce fertile breeding ground for black mold in structures resulting in respiratory health issues; and waste disposal issues. Images shared by residents are shocking, and powerfully represent the Newtok community’s experiences.

Fly-over of the current village of Newtok, showing the Newtok River to the left and center, and the Ninglick River in the background. (Photo by Sally Russell Cox, DCCED/DCRA)

The impacts of this slow climate disaster are visible in every facet of life. “The banks of the Ninglick River have been rapidly losing ground to erosion. In one year, the river took as much as 300 ft of land.” (Source: https://www.theguardian.com/environment/interactive/2013/may/15/newtok-safer-ground-villagers-nervous) 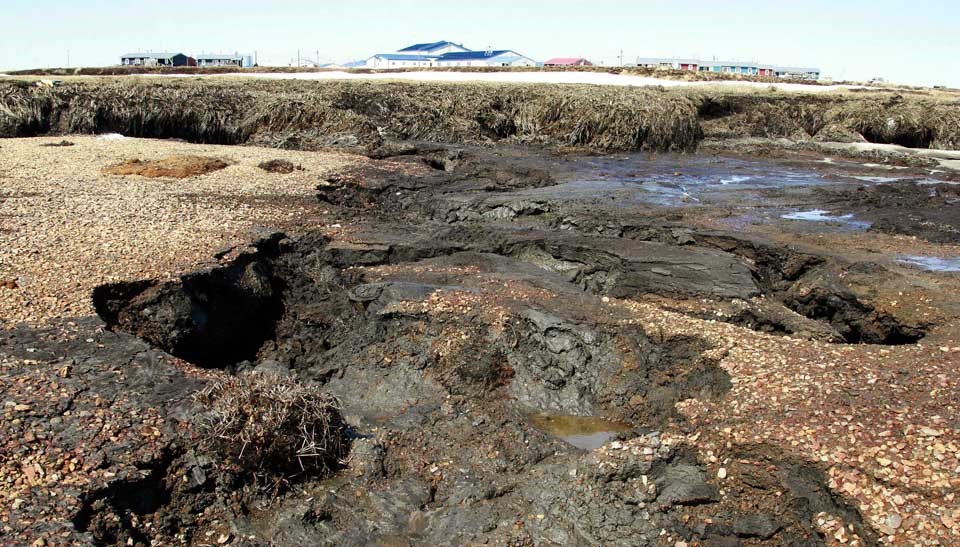 This photo shows how close the eroding bank of the Ninglick River is to homes and the Newtok School. (2013)

“Human waste, collected in “honey buckets” that many residents use for toilets, is often dumped within eyesight of the village. Historically, Newtok discharged its untreated sewage into the Ninglick River, but with the change in hydrology, the disposed waste has no place to go. When the village floods, as it does most years during sea-ice break-up, the water washes up to the houses, stinking of sewage and waste.” (Susan Goldenberg) 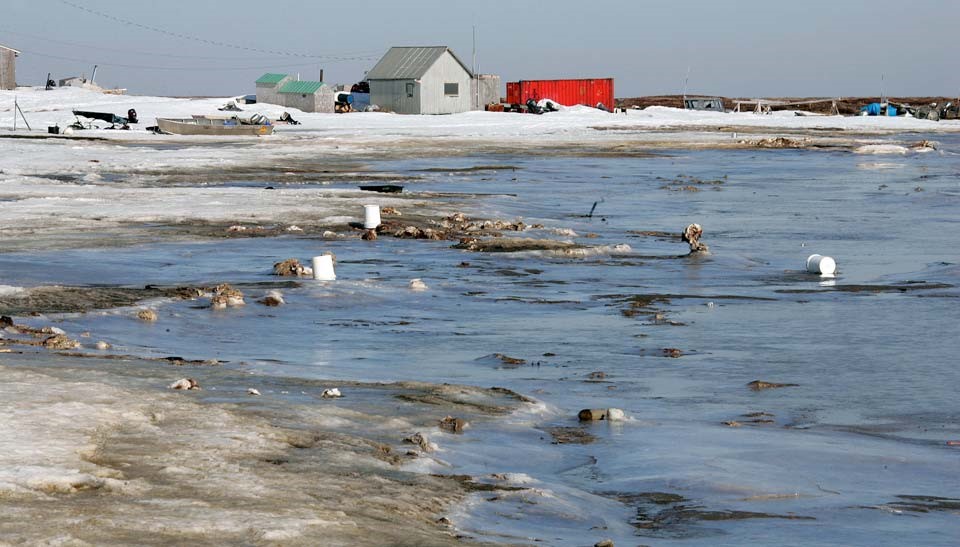 Once the [winter] snow melts, people make their way around Newtok on wooden boardwalks set down on the mud. But the melting permafrost no longer provides stable ground for village buildings or the boardwalks. The boardwalks have also taken a beating over the years due to increasing severe storms that bring flooding from the Ninglick River. (The Guardian) 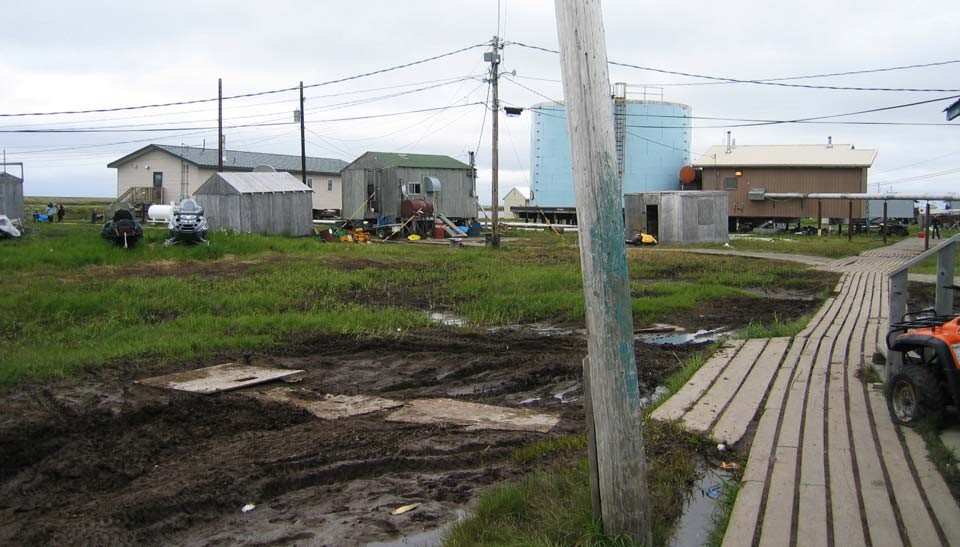 The impact of environmental degradation is felt in every aspect of the Newtok residents’ lives. The community has no choice but to relocate, and the cost will be tremendously burdensome both financially and mentally. There is uncertainty about how relocation will be funded, which has heightened feelings of stress and anxiety among residents. However, the true losses go beyond financial demands.

Newtok Village residents are forced to leave behind a place they have called home for many generations; a place that has their culture and way of life woven into it. It will not likely be duplicated in a new village location. 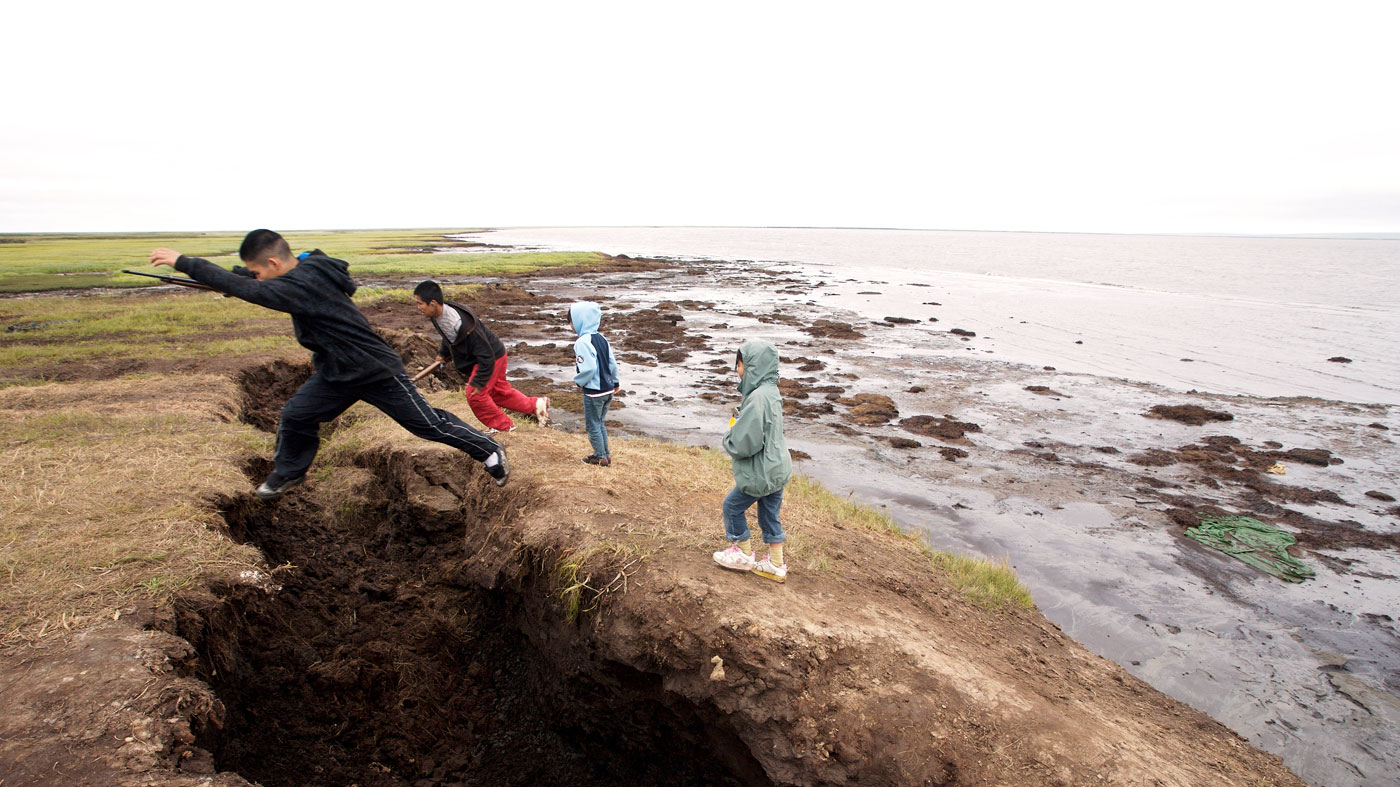 Children at Risk. “Children jump over ground affected by erosion in Newtok. Natural erosion has accelerated due to climate change, with large areas of land lost to the Ninglick River each year. Photo by Brian Adams. Source: https://www.theguardian.com/environment/interactive/2013/may/15/newtok-safer-ground-villagers-nervous

In Dr. Martin Luther King’s speech, “I Have a Dream,” he stated: “I have a dream that my four little children will one day live in a nation where they will not be judged by the color of their skin, but by the content of their character.” One wonders what is the dream of the Newtok Village parents for their children? Could it be simply to live, to survive? The time for prayer for guidance and hope could not be greater.

“Merciful God, when the storms rage and threaten to overtake us, awaken our faith to know the power of your peace.

Deliver us from our fear and ease our anxiety. Help us to endure the time of uncertainty and give us strength to face the challenges ahead.

Give us the assurance of your presence even in this time so that we can cling to your promise of hope and life shown to us through Jesus Christ, our Savior and Lord. Amen.”