Sophia Chung reflects on her time at the 61st Commission on the Status of Women. Sophia is originally from Kota Kinabulu, Malaysia, and is a member of the Basel Christian Church of Malaysia. She is a member of the ELCA’s International Women Leaders initiative and is pursuing a bachelor’s degree at Lenoir-Rhyne University in Hickory, North Carolina. 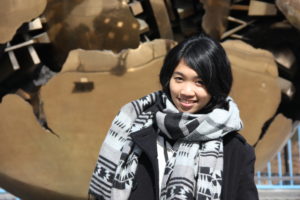 I truly appreciated the opportunity to attend CSW in New York not only because it was a chance to expand my horizon, but also because it helped me to see more possibilities and responsibilities now and in future. Everything I experienced and learned throughout those five days is more than I could list down or express through words. I am thankful for all the meaningful conversations I had with people I met or with my teammates during meal times because they helped me developed my thoughts with much more depth. Through all these conversations, God reminds me of His plan for me, His promises, and His grace which never leaves me. Through the preparation for CSW, I learned how shallow my knowledge was, and I realized I had stayed in a comfort zone for such a long time. I thought that I knew what was going on in my country, but I realized I was unaware of a lot the issues going on there. I realized that my country women’s status in the family is the second worst in Southeast Asia, it has the second highest “discriminatory family code” in the region (meaning women’s status are undervalued), women have less than 10% political representation, marital rape is not considered a crime in my country, and the government has no plans to change it. Not only that, according to the WEF Global Gender Gap study in 2014 shows that my country has the worst gender gap in Southeast Asia, and perhaps a lot of this stems from the country’s view of women. I realized that things like marital rape and other major issues may not be happening in my community, all the aforementioned issues are happening in my country. So, this left me with the question: what can I do?

This trip has helped me reflect and start thinking what my church back home can do so that we can reach both indigenous and Muslim women and young girls. These are sensitive topics in a Muslim majority country because of the many legal restrictions and limitations enforced by the government. So, providing government funded education, expecting new government policy, or giving out resources are not likely to happen. Also, it isn’t efficient or a long-term solution for the church back in Malaysia to simply supply economic resources in cases where the government care for women might be lacking. It’s easier to say that I’m going to be a part of changing the status quo than to actually take steps to make it happen, but attending the conference has motivated me to start planning so that this is not just a unilateral resource assistance, but a two-sided cooperation and management, that ensures a healthy relationship between church and community that can last to the next generations. This is a never-ending-learning process, and I wish that I could have stayed a few more days to learn and absorb. But I think it is more valuable to begin implementing the knowledge I do have in my church and community, and to begin writing down a real plan and share it with my pastors and church leaders.

Lastly, I am reminded of a quote from Thomas King, “Don’t say in the years to come that you would have lived your life differently if only you had heard this story. You’ve heard it now.” We are each confronted by pressing issues within our culture and society, instead of simply turning a blind eye, we must each identify our role in shaping the future and the change we hope to see.