In her sermon, my pastor lamented that “each person killed was a precious and irreplaceable child of God,” on the Sunday following the racially motivated massacre of 10 shoppers and workers at the Tops supermarket in Buffalo, N.Y. The irreplaceability of each person made in God’s image stands in marked contrast to so-called “Great Replacement” theory, the fear that stoked the White shooter’s hatred and motivation to target and gun down people of African descent.

The Great Replacement is a far-right conspiracy theory that claims there is a plot to bring nonwhite, non-Christian people to western nations through immigration. The assumed aim is to “replace” White, Christian majorities by adding voters of other races, ethnicities and religions, resulting in the marginalization of the White Christian population and loss of its political power and cultural dominance. Rather than using inevitable demographic shifts as a moment for reflection and repentance in the White community for historic injustices in its treatment of minority groups, replacement theory uses the coming change to stoke fear and to call for White people to cling to power by any means necessary, which does for some include acts of horrifying violence. 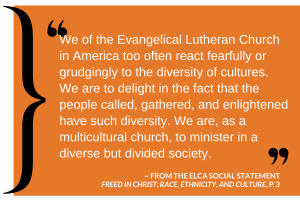 What began as a fringe theory in the corners of the internet has now gained prominence in multiple acts of mass violence. At the “Unite the Right” rally in Charlottesville, white supremacists marched while shouting, “Jews will not replace us.” Replacement theory echoed through the lives and motivations of the shooters at the Tree of Life synagogue in Pittsburgh, at two mosques in New Zealand where 51 worshippers were killed and at the El Paso Walmart where 23 people were murdered. In each case, white shooters invoked the grievance and language of “invasion” and “replacement” by Jews, Muslims and Latinés.

The Great Replacement has been employed by White nationalist groups in the U.S. to recruit members by making dire predictions about loss of White power and control. It is invoked by politicians who stir up fears of migrants and immigrants by portraying them as violent invaders. As pronouncements of replacement theory move from fringe to center, our voices and actions are needed to replace hate-filled speech with God’s vision for the Beloved Community. 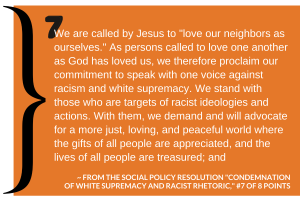 The ELCA social statement Freed in Christ: Race, Ethnicity, and Culture grounds us in this moment with the church’s teaching that refutes replacement theory and points us towards the fulness of human diversity that God intends. The ELCA teaches that there is one humanity created by God. Our oneness in Christ, who breaks down dividing walls of hostility, connects all people. Yet we, in our sinfulness, rebuild those walls, and cement discrimination and injustice into them. Our statement names the church’s complicity in individual and structural racism while also pointing forward to an identity beyond it that we have yet to fully claim.

The irreplaceable truth is that we are freed in Christ to see and celebrate the image of God in everyone in our beautiful diversity. We are called to co-create a common life that affirms the diversity of cultures and people as a God-given gift. This is a blessing to be appreciated, not absorbed by assimilation or destroyed by fear. God hands us the vision of the Beloved Community, reconciled to God and to one another. But we cannot realize this vision without embracing our freedom in Christ. In this freedom we repent, we repair, we reconcile, including offering of our faith-filled public witness that denounces hateful speech, supports equal rights at home and promotes international respect for human rights. 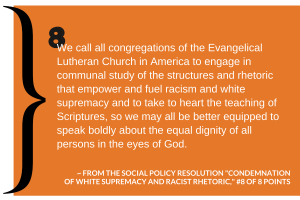 Replacement theory may be the new wine in the old wineskins of intolerance, bigotry and White supremacy. Luther once said that because poverty is an evil that is always in evidence, it is an evil always to be opposed. The same applies here. Christians need to be tireless opponents of this or any teaching that diminishes, distorts or denies the image of God in every person. No one is replaceable.

We are called to replace language that denigrates and divides, including within our own congregations, by naming the sin of racism and continuing our repentance of it in our words and actions. God stirs us to confront hateful speech and promote a better public life, replacing unjust laws with policies that will preserve human dignity and increase justice in immigration, civil rights, housing, employment and other arenas. Actions birthed from our Christian practice will then be discipled by the fruits of the Spirit.

In his lectures on Deuteronomy, Martin Luther said “constant care should be taken that, since these evils are always in evidence, they are always opposed.” We need to talk about, condemn and disown evidenced evils. Following are samplings of moments on our ELCA journey toward better living into fruits of the Spirit. Refer to the documents for additional reflections and action steps.

From “A Declaration of the ELCA to the Jewish Community” (1994)

“Grieving the complicity of our own tradition within this history of hatred, moreover, we express our urgent desire to live out our faith in Jesus Christ with love and respect for the Jewish people. We recognize in anti-Semitism a contradiction and an affront to the Gospel, a violation of our hope and calling, and we pledge this church to oppose the deadly working of such bigotry, both within our own circles and in the society around us.”

“The ELCA teaches that racism is sin and that racism denies the reconciling work of the cross. Rooted in slavery, racism is manifested through the history of Jim Crow policies, racial segregation, the terror of lynching, extrajudicial killings by law enforcement, and the disproportionate incarceration of people of color. Descendants of formerly enslaved Africans are still denied equal access and opportunity in church and society while white people collectively benefit from unequal access, opportunity, and power.”

From “A Declaration of the ELCA to the Muslim Community” (2022)

“Through loving our neighbors, we have come to reject Luther’s polemics. We do not dismiss our history but take it to heart. By embracing dialogue instead of rejecting difference, we have come to realize that we can truly love our neighbors only when we know them…Given the disunity around us and the fear of the unknown, we sense the renewed urgency to nurture relationships and build communities in which we look upon one another with respect and esteem, in which people feel safe and loved, and in which we seek the common good together.”

“[We] resolve and proclaim that:

From the ELCA social statement Freed in Christ: Race, Ethnicity, and Culture

“We of the Evangelical Lutheran Church in America, with the whole Church, look forward to the time when people will come from east and west, north and south to eat in the reign of God (Luke 13:29). For the Church catholic, diversity of cultures is both a given and a glimpse of the future.” (p. 2)