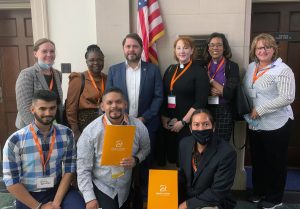 Major Grant Received! LAMA, together with its Arizona Hunger Policy Workgroup partners including Bread for the World, World Hunger Ecumenical Arizona Task-Force (WHEAT), Arizona Food Bank Network, Arizona Food Systems Network and Arizona Faith Network, received a $20,000 SPARK Grant from the Vitalyst Health Foundation. The funds will be used to bring together all hunger advocates and experts in the state of Arizona in one place at one time to strategize about hunger and food insecurity across the state. The initiative is expected to produce a game plan and policy that all Arizona hunger advocates support, and each will work to promote these in the 2023 legislative session. 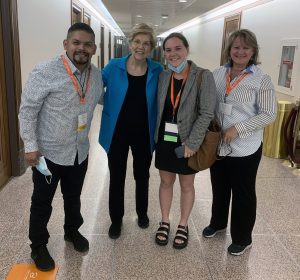 LAMA Goes to Washington! LAMA director Solveig Muus joined colleagues from across the country for the Bread for the World Advocacy Summit in Washington, D.C. on June 6-7. Highlights were visits with Rep. Ruben Gallego (D, AZ-07), Sen. John Cornyn (R-TX) and Sen. Ben Ray Luján (D-NM), urging them to extend the Child Nutrition Waivers through 2023 and support S.2956, the Global Malnutrition Prevention & Treatment Act. We took in the sights, attended a meeting of the Senate Energy & Natural Resources Committee, and rubbed elbows, D.C.-style.

Hunger Leaders Network Turns One! The Grand Canyon Synod’s Hunger Leaders Network reached a milestone and is just hitting their stride! Each monthly meeting features updates from a churchwide expert as well as a local hunger partner. A special highlight was a greeting and update from Presiding Bishop Elizabeth Eaton in January.

The Lutheran Office of Public Policy California sponsored Lutheran Lobby Day on Wednesday, May 18th. This virtual event brought Lutheran advocates and ecumenical partners together online to advocate for measures aimed at ending deep childhood poverty in California, financial assistance for families with young children, aiding children who lost parents and caregivers to the COVID 19 pandemic, securing clean safe affordable drinking water and other issues. The event was a great success, and we anticipate that the 2022-2023 budget will include most of these important concerns at funding levels unseen in the last decade. The budget deadline was June 15. 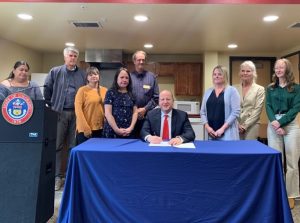 Ballot Season coming soon: The Colorado Legislature may be adjourned for the year, but the many campaigns for Colorado ballot measures will be coming soon to a screen, mailbox, and billboard near you. We are excited to be working on a ballot measure to fund healthy meals for all public school students! More information on this & other campaigns will be coming this summer.

March for Our Lives Service: An ecumenical Service of Lament & Prayer was held at St. John’s Episcopal Cathedral on Saturday, June 11, ahead of the March for Our Lives rally in downtown Denver. Representatives from Lutheran, Episcopal, Methodist and more faith traditions were present to offer lament for recent gun violence across the United States and to call for prayer and action.

The Kansas legislature ended its annual session on Monday, May 23. We’re very pleased that of the four vetoes KIFA worked on, three were sustained:

The governor’s veto on a bill that added restrictions on SNAP was overridden.

Bills that in the end didn’t pass included measures that would have expanded exemptions for childhood vaccinations, as well as a bill which would have limited mail-in and drop box voting.

The Congressional maps, which our coalition sued over, were allowed to go into effect by the Kansas Supreme Court. This surprise result ignored the findings of the district court, which found that the maps had been racially and politically gerrymandered.

While we certainly wish that our more proactive legislative priorities, such as Medicaid expansion or payday loan reform, would have passed, the fact that we (and our allies and coalition partners) were able to keep some bad bills from becoming law has to be considered a victory. We are particularly pleased with the defeat of the “Parent Bill of Rights,” which was the culmination of a six-month long effort by the “Teach the Truth” coalition – under KIFA’s leadership – to protect the right to learn the truth about American history.

…was extremely disappointing! An agreement was announced in the final days for a Bipartisan Framework splitting the surplus into tax cuts, supplemental budget, and reserves, but bills based on the framework failed to come to final votes. A Tax Agreement could only be passed after the other Conference Committee negotiated bills were passed by both chambers.

Energy/Climate: The negotiated bill passed in committee with overwhelming bipartisan support, and included several things we supported. However, without final passage, Minnesota risks losing its share of federal funds (matches to the Bipartisan Infrastructure Act).

Affordable Housing: Housing was allotted disappointingly low funding in the framework, and no negotiated bill reached agreement before adjournment.

Homelessness & Shelter Funding: Failure to come to agreement on funding in the Health & Human Services Conference Committee meant no funding for homelessness or shelters.

Special Session? A special session is still needed! The legislature didn’t finish its work! Several bills were negotiated in good faith by both chambers and parties, but they were not brought to a final vote.

We thank all our advocates for tremendous efforts played out in calls, emails, old-fashioned letters, and visits with legislators. Despite how things turned out, we hope to still see those efforts bear fruition in deals yet to be made!

Tammy Walhof, Director of LA-MN, is on sabbatical from June 13th to August 12th! She is excited to have sabbath time, travel to Iceland, and visit different parts of the state to hear how communities are already experiencing climate impacts. Rachel Wyffels, Hunger Advocacy Fellow, is the primary contact person for LA-MN during this time.

I had the privilege to be with the East Ohio Conference of the United Methodist Church in Akron in early June and was blessed with many one on one conversations with folks doing great work in their communities. The stories I heard were similar to the stories I heard a month ago at the Northeastern Ohio Synod Assembly (ELCA). If I had to summarize what I heard, in one word, it would be Anxiety. Faith leaders are confronting the anxiety of the world, and many of our siblings in faith expressed anxiety over a few key issues.

Inflation: Stock returns mean nothing to folks struggling to put food on their table. Many local pantries and community meal programs are dealing with increased demand as people are working hard but aren’t able to afford rising gas and food prices. While the pandemic might be transitioning into a new phase, it has left scars on our communities that will last for generations if policy officials don’t take action.

Addiction: For the past decade, the anxiety only has grown over the opioid epidemic in Ohio and the lack of resources to provide treatment and support for individuals struggling with the illness of addiction.

Healthcare: The lack of affordable and comprehensive health insurance, the reduction in health services for women and LGBTQIA+ are increasing the anxiety of faith leaders who are on the front lines in the battle against hunger and poverty. All Ohioans need access to healthcare services.

As the body of Christ, we have been called to serve those who are struggling today and address the root causes of the suffering by changing policies and the conditions that have created these difficult conditions for our communities. 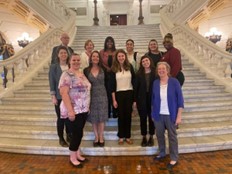 LAMPa presence in the Capitol increased as the state budget deadline grew closer. Staff participated in press events and met with lawmakers, seeking support for policies in the priority areas of hunger and poverty, housing and creation care.

LAMPa staff accompanied mothers whose families receive Temporary Assistance for Needy Families (TANF) as they explained what a proposed cut in cash assistance grants would mean to their children and stood with families who are struggling to hold on to homes in need of expensive repairs. LAMPa is supporting a whole-home repair bill that would help people stay in their homes – part of the answer to the state’s housing crisis and a need in both old mining regions and urban centers. The repairs would also help climate goals by making homes more energy efficient. LAMPa is also advocating to lift the cap on the percent of realty transfer tax that can go into the Pa. Housing Accessibility and Rehabilitation Enhancement (PHARE) Fund to enable that fund to grow to meet challenges posed by increasing housing prices. Watch this panel discussion to learn what that would mean to communities in which Lutherans are engaged in ministry with people experiencing homelessness.

LAMPa staff also met with lawmakers in support of investments in a cleaner, healthier environment and shared the experience of Lutheran Disaster Response while urging legislators to codify and strengthen the Office of Environmental Justice.

Earlier in the year VICPP had won two study bills – one looking at solitary confinement and one considering requiring unconscious bias training for healthcare professionals. VICPP is now working diligently to assure that these study bills address the concerns of legislators and that we are completely prepared for the 2023 General Assembly.

On June 25th and July 30th, VICPP will host Living Wage Canvasses around the state to encourage businesses to become Living Wage Certified. For more information about this canvass, visit https://virginiainterfaithcenter.ourpowerbase.net/civicrm/event/info?reset=1&id=195.

Over Labor Day Weekend, VICPP will release a report on the State of Working Virginia. Consider planning a special Labor Day service that weekend to lift up concerns for workers in low-wage jobs. 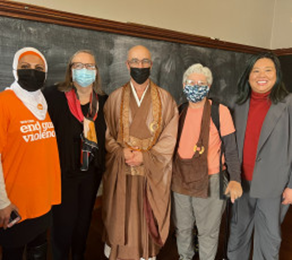 We have just finished our annual regional summits and have enjoyed the time reconnecting with committed advocates in a hybrid format. These took place in Vancouver, Yakima, Spokane and Seattle, each with a Zoom option. We listened to advocates’ input in all the categories of our work: economic justice (hunger/poverty/safety net/tax reform), criminal justice and police reforms, housing and homelessness, environmental justice, healthcare, immigrant rights, and other civil and human rights. We shared the 2022 Legislative Session victories and what our coalition partners are working toward for next year. We heard the unique concerns from communities in each region, while making the connections between their regional experiences and statewide/federal policy changes needed. 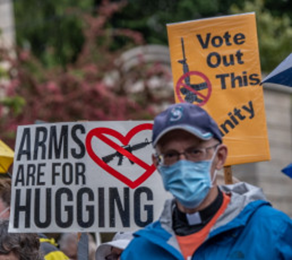 Our advocacy this season has included bills in Congress that will impact Washington State communities, like the Child Tax Credit, housing bills included in budget reconciliation, and H.R.5444, the Truth and Healing Commission on Indian Boarding School Policies Act. And of course, in the wake of too many mass shootings, we have held vigils and marched, and called our network to act. We will continue to say #Enough until strong gun legislation is enacted.