By Rebecca Anderson, Intern at the Lutheran Office for World Community*

According to the International Organization of Migration, today there are an estimated 271.6 million migrants globally. While migrants are not inherently vulnerable, they can be vulnerable to human rights violations, observes the United Nations Office of the High Commissioner on Human Rights (OHCHR). It is imperative to protect their human rights.** 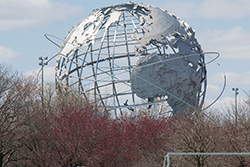 Migrants are forced to move for various reasons: governmental oppression, war, famine, climate change and better employment or educational opportunities. The list goes on. Of the 272 million international migrants, United Nations Department of Economic and Social Affairs 2019 data indicates one in seven migrants are below the age of 20, with Sub-Saharan Africa hosting the highest proportions followed by Latin America and the Caribbean, West Africa and North Africa. In these age groups, the dangers of human rights violations are exponentially increased due to vulnerability factors such as education disruptions, food insecurity and sexual violence.

Fatou “Toufah” Jallow, a 23-year-old activist from The Gambia, left her home country temporarily to retain her safety after experiencing sexual violence until she could return to seek justice. She spoke of her experience on a youth delegate panel I heard at “Celebrating Human Rights Day: Youth standing up for human rights” hosted on Dec. 10*** by OHCHR. In his introductory remarks at the event, Assistant Secretary-General Andrew Gilmour spoke to the “sustained and sometimes ferocious pushback against the entire global human rights agenda that we haven’t seen before.” He highlighted growing “hate speech and prejudice” towards migrants and minorities.

Migration also has gender dimensions that must be considered. In a 2019 report by the Special Rapporteur on the human rights of migrants to the Human Rights Council, Felipe González Morales emphasized this and highlighted the need for migration to be understood as a “gendered phenomenon,” enabling member states to better protect the rights of migrant women and girls from gender-based discrimination, abuse and violations at each stage of their journey. Migrants need ensured access to basic services – education, health, water, sanitation and hygiene – and social protection.

As Christians, we all have a common identity as children of a loving God who calls us to reflect love outwards, acting in compassion for our fellow neighbor. The ELCA and Lutheran World Federation (LWF) have been welcoming migrants and refugees for decades. During the negotiations for the New York Declaration for Refugees and Migrants and the Global Compact for Migration (GCM), Lutheran Office for World Community championed migrant human rights. We are members of the NGO Committee on Migration and the Civil Society Action Committee that monitor UN events and meetings on migration and advocate for the full implementation of the GCM and the Sustainable Development Goals.

Migrants are our sisters and brothers in need of our compassion both as individuals and as a community. As Lutherans, we work with migrants from all around the world with aid, respect and inclusivity. We extend our embrace to those of us who must flee from dangerous situations or seek out a better life for themselves and their loved ones. Migrants deserve a life of dignity and freedom to enjoy their inalienable human rights as enshrined in the Universal Declaration of Human Rights.

* The Lutheran Office for World Community is a joint ministry of the ELCA and LWF. Staff actively participate together with other Non-Governmental Organizations (NGOs) in various UN meetings and consultations.

** Read more in the ELCA social message on “Human Rights” which notes that “staggering numbers of God’s children have not experienced [human rights] advancement” (page 1).

*** Human Rights Day is observed annually on December 10 to celebrate the anniversary of the General Assembly’s adoption in 1948 of the Universal Declaration of Human Rights. This momentous document sets out fundamental universal human rights that are to be protected worldwide regardless of race, ethnicity or culture.