May Update: UN and State Edition

*From April 29 to May 1, the Lutheran Office for World Community and state public-policy offices attended the 2019 ELCA Advocacy Convening in Washington, D.C. The theme of the convening was, “Prepared to Care: Our Advocacy in Light of Disasters Intensified by Climate Change”. Over 70 attendees, including ELCA bishops, community leaders, and state public-policy advocates, participated in workshops, trainings, and hill visits with their legislators.

Among the many side-event that took place was, “Faith-based Approaches to Sexual and Reproductive Health from a Human Rights’ Perspective” organized by ACT Alliance, the World Council of Churches, UN AIDS, Faith to Action Network, Islamic Relief-USA, the Milstein Center for Interreligious Dialogue, United Nations Population Fund (UNFPA) and Permanent Missions of the Philippines and Norway. The event emphasized that religious actors play a crucial role in advancing gender equality and sexual and reproductive health and rights. Specific topics included delivery of health and education services and how religious leaders and other religious authorities function as “norm setters”, and their relationships as advocates with legislators nationally and globally. Watch the event here. Read the full report on the general debate over sexual and reproductive rights during CPD session here.

The Lutheran Office for World Community attended the 18th session of the United Nations Permanent Forum on Indigenous Issues (UNPFII) held April 22 – May 3 the Headquarters of the United Nations. This year indigenous people are sharing invaluable knowledge and information around the theme “Traditional Knowledge: Generation, Transmission and Protection.”

The chair of the forum stated that “traditional knowledge is at the core of indigenous identity, culture and heritage around the world and must be protected.” Discussion centered on the urgent need to preserve and revitalize indigenous languages in this the International Year of Indigenous Languages. According to the publication Ethnologue:Languages Around the World, of the 7000 languages spoken around the world 2,680 are in danger of disappearing, and with them the important culture and practices they articulate.

During the session on human rights of indigenous peoples, Victoria Tauli Corpuz, the UN Special Rapporteur, spoke on attacks on and crimes against indigenous peoples, highlighted in her 2018 report to the Human Rights Council. Her 2019 report will focus on indigenous governance and systems.

Other side-events during the forum included, the launch of “Indigenous Youth: Through Their Eyes,” a book by the Global Indigenous Youth Caucus and the UN Special Envoy on Youth in collaboration with Columbia University. Fourteen indigenous youth contributed to the book, representing all seven regions of the world. They shared a unique perspective on indigenous issues that are affecting the world today.

Read more about the United Nations Declaration on the Rights of Indigenous Peoples, adopted by the General Assembly in 2007. 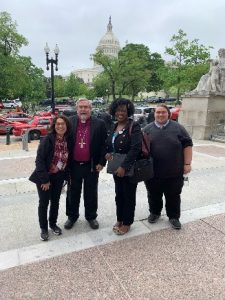 ADVOCACY CONVENING: California was well-represented at this year’s Advocacy Convening held April 29 through May 1 in Washington, D.C. The theme of this year’s event was “Prepared to Care: Our Advocacy in Light of Disasters Intensified by Climate Change”. The California delegation consisted of Bishop Guy Erwin of the Southwest California Synod, Debi Groon of Lutheran Social Services of Southern California, Wylie Cook a seminarian and board member of the Lutheran Office of Public Policy- California, and Regina Q. Banks, director of LOPP-CA.

The delegation discussed the ELCA’s commitment to disaster response and preparedness with congressional representative Gilbert Cisneros (CA-39), Doris Matsui (CA-06) and Brad Sherman (CA-30),  as well as senators Kamala Harris and Diane Feinstein. All of the meetings went very well and it was decided all of the offices were

receptive to the ELCA Advocacy Ask.

LUTHERAN LOBBY DAY IN SACRAMENTO: Washington was good practice for California’s first statewide advocacy event scheduled for Wednesday May 29th in Sacramento. You can still register for Lutheran Lobby Day at the State Capitol. Participants from D.C. will give an in-depth debrief. Information and a link to register can be found at www.loppca.org

LEGISLATURE CONCLUDES: The Colorado General Assembly adjourned on Friday, May 3, after four months of legislative work in 2019. Major priorities of the Lutheran Advocacy office this session included death penalty abolition, paid family leave, school lunch access, renter’s rights, and climate action. The assembly had not adjourned by our deadline, so consult our June update for a full run-down of how these priorities fared.

ADVOCACY CONVENING: Colorado was represented at the ELCA Advocacy Convening in Washington, D.C. from April 29 to May 1. Peter Severson, director of LAM-CO, and Jim Gonia, Bishop of the Rocky Mountain Synod visited with staff of the Colorado congressional delegation on Capitol Hill.

ROCKY MOUNTAIN SYNOD ASSEMBLY: The Rocky Mountain Synod convened May 3-5 for its 2019 assembly in Albuquerque, N.M., under the theme “Be Transformed!” The event featured keynote speaker Fr. Richard Rohr and also lifted up the ministries of the RMS that are leading hospitality for migrants in Las Cruces and El Paso.

CONGREGATION VISIT: Thank you to the people of Our Saviors’ Lutheran Church in Fort Collins for hosting LAM-CO Director Peter Severson, who preached at their Wednesday Lent service on April 3!

Last month we reported on our March 26 Advocacy Day event, Lutherans at the Legislature 2019, and

follow-up efforts by congregations across the state. Our advocacy focus was to raise awareness about the significant number of homeless people in our communities and to ask for increased support from the state for affordable housing initiatives across our 100 counties.

The measure, which passed first reading on April 4, is now under review by the House Com 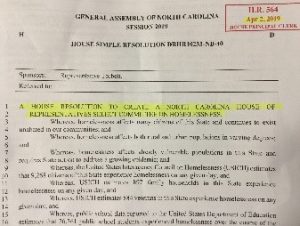 mittee on Rules, Calendar, and Operations, and we are hopeful that the resolution will be allowed to the floor and passed before the end of this year’s legislative session.

SJAM efforts in this area of advocacy continue, our next event being a pre-assembly educational forum on homelessness and affordable housing.

GOVERNOR MICHELLE LUJAN GRISHAM SIGNS BILLS SUPPORTED BY LUTHERAN ADVOCACY MINISTRY-NM: Eight bills for which LAM-NM advocated during the 2019 legislative session made it to the governor’s desk for consideration and were signed into law:

WASHINGTON, D.C. ADVOCACY CONVENING: We just returned from D.C. We had good visits with our

legislators or their assistants; Rob Woodall (GA) and Gary Palmer (AL) individually welcomed us to D.C. and talked with us for 30 minutes. It was very refreshing to have them take time out of a very busy day to speak with us.

MISSISSIPPI LEGISLATION 2019 – ’20 SESSION: Mississippi’s legislative session has closed for the year. We were fortunate to have six of the bills we supported pass.

THE OHIO BUDGET – A MORAL DOCUMENT: Ohio continues to trail the nation in hunger, infant mortality, college tuition, income, and overdose death rates. We must do better. Faith leaders across Ohio attended an advocacy day at the Ohio statehouse in early April to discuss affordable housing, food security, a refundable Earned Income Tax Credits (EITC), and fair school funding. The senate will spend May putting their mark on the budget before a final version goes before the governor by June 30.

TAKE ACTION WITH A LETTER TO YOUR LOCAL PAPER: Public officials are dealing with many important 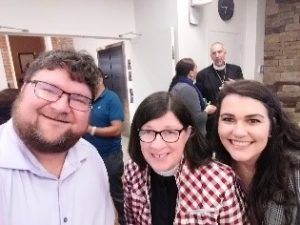 issues in the state budget, but you can help lift up the needs of hungry Ohioans with a letter to the editor. CLICK HERE for instructions and a link to your local newspaper. This advocacy is extremely important!

OTHER HAPPENINGS: The Hunger Network was pleased to join our ELCA colleagues in Washington, D.C., for an advocacy convening on climate change and disaster. As we know, those already struggling to get by will bear the brunt of the impact of climate change. (top: Nick Bates, Presiding Bishop Eaton, and Amanda Silcox) . (bottom: Nick Bates, Sen. Rob Portman, John Pyron, and Paisha Thomas). 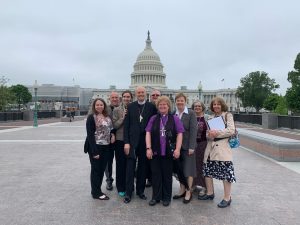 Susquehanna synods, respectively, as well as five LAMPa advocates in Washington, D.C., for the ELCA Advocacy Convening “Prepared to Care: Our Advocacy in Light of Disasters Intensified by Climate Change.” Along with bishops and leaders from around the country, the group learned about climate and disaster response before visiting lawmakers to advocate for policies to address the threats posed to all.

LUTHERAN DAY AT THE CAPITOL: Registration is open for our day of advocacy on May 20, which will begin at Trinity Lutheran Church in Camp Hill and include presentations on hunger 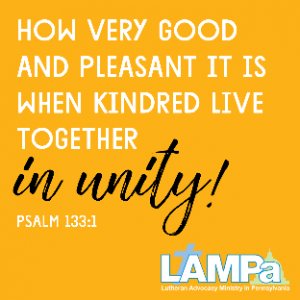 and child nutrition, human trafficking, climate change, prescription drug pricing, the ELCA proposed Declaration of Inter-Religious Commitment with keynote speaker Kathryn Lohre, and more. In addition, the day will include worship, legislative visits, breakfast, lunch and a celebration of advocates from each synod. The advocacy day is part of a two-day event on the theme “Set A Welcome Table,” designed to equip disciples to live into the beauty of Psalm 133:1: “How very good and pleasant it is when kindred live together in unity!” More.

CIVIL CONVERSATIONS TRAINING: On May 19, LAMPa will co-host training inspired by Krista Tippett’s “On Being” podcast and the Civil Conversations Project. Designed to help participants improve their skills for engaging in meaningful conversations in divided times and organize civil conversations in their community. This event invites people of all faiths to build a thriving, diverse democracy. More.

HERE ARE JUST A FEW OF OUR EXCITING SUCCESSES OF 2019’S SESSION:

FAN HAS BEEN WORKING FOR PEACE IN UNJUST AND DIFFICULT TIMES. We celebrated as the No Ban Act was introduced at the federal level and we met with local staff senators Murray and Cantwell who support the measure. As part of Holy Week, we attended a Table Turning event at Tukwila Detention Center to call out the systems of oppression that harm our neighbors. We mourned with the victims of the shootings in Sri Lanka and San Diego, attacks on people of faith that come far too frequently. We hosted a Statewide Giving Day on April 30 and took to the streets the following day to march with our union friends for May Day. Our work extends from our local communities across the state to the federal level. 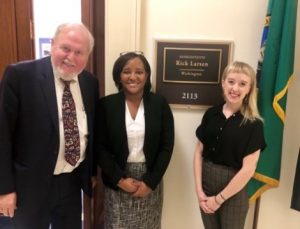 PAUL AND SARAH ATTENDED THE ELCA ADVOCACY CONVENING IN WASHINGTON, D.C., and met with the staff of Washington State’s congressional respresentatives. We discussed climate change, natural disaster response, and funding for Puerto Rico.

Our state government is currently shaping its 2019-20 budget. Many of our efforts as an individual ministry and in coalition with our partners have been focused on influencing the budget according to our priorities on hunger and poverty.

PEOPLE OF FAITH UNITED FOR JUSTICE – INTERFAITH ADVOCACY DAY: One of our budget priorities was clean drinking water in Wisconsin, on which LOPPW took a leadership role. LOPPW’s director, Cindy Crane, and Lutheran Campus Ministry Faith and Vocation Fellow, Sarah Schultz, co-led a workshop on the state of drinking water in Wisconsin. Both Schultz and Hunger Fellow Kelsey Johnson served as legislative captains, leading participants from their assigned districts to their state senator’s and representative’s offices. 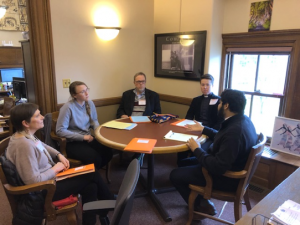 Kelsey (right) leading participants in a discussion during a legislative visit.