“The earth is a planet of beauty and abundance; the earth system is wonderfully intricate and incredibly complex. But today living creatures, and the air, soil, and water that support them, face unprecedented threats. Many threats are global; most stem directly from human activity. Our current practices may so alter the living world that it will be unable to sustain life in the manner we know.” 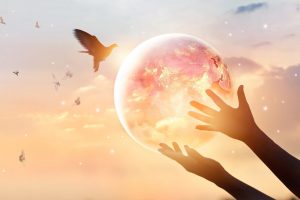 Strikingly, it describes the state of the environment in 2018.

The release of greenhouse gas (GHG) emissions acts as a blanket surrounding earth and leads to increase in the atmospheric temperature — global warming. Because of global warming the earth is experiencing increased frequency, severity, and intensification of weather patterns and temperature extremes. The aftermath varies depending upon locale: floods, droughts, and wildfires; coastline erosions due to sea level rise; and acidification of oceans – all of which are yielding the degradation of the earth and negatively impacting its habitants at unprecedented rates. The consequences are staggering – forced migration; exacerbation of poverty; national security concerns; negative impacts on agriculture resulting in food insecurity; and threats to ecosystems that could lead to the extinction of some species.

Human activity and devastating accumulation of GHG emissions in the atmosphere are linked.1

Without human activity deploying drastic measures immediately to stop the earth’s degradation, we are rapidly losing our ability to salvage our home here on earth. While the deterioration that the earth is experiencing is seen around the entire world, the impact varies and is not equal. The most vulnerable are disproportionately affected while they have contributed the least to the release of GHG emission into the atmosphere. They are also ill-equipped to implement the remedies needed to create resilient communities and societies to combat climate change.

The Intergovernmental Panel on Climate Change (IPCC) which is the United Nations’ (UN) body for assessing the science related to climate change, issued its 2018 report entitled: “Global Warming of 1.5°C” (Report). The Report expressed the urgency of the need to take rapid strategic action over the next decade to limit global warming to 1.5ºC to avoid the risks associated with long-lasting or irreversible change. “Limiting warming to 1.5ºC is possible within the laws of chemistry and physics but doing so would require unprecedented changes,” said Jim Skea, Co-Chair of IPCC Working Group III.2

This is one of the most challenging times that we have ever faced as a global community and church. Our lives and future generations depend on the actions we take or do not take. The IPCC Report makes this very clear. We no longer have the luxury to focus on one industrial sector. We must address GHG emissions from all sectors.

The world is in a dire situation, but it is not hopeless. The God of hope grounds and guides us through the story of Scripture, where resurrection overcomes death, and hope triumphs over despair. In ancient Israel, as Jerusalem was under siege and people were on the verge of exile, Jeremiah purchased a plot of land (Jeremiah 32). The Caring for Creation social statement reminds us: “When Martin Luther was asked what he would do if the world were to end tomorrow, he reportedly answered, ‘I would plant an apple tree today.’ When we face today’s crisis, we do not despair. We act.” The IPCC suggests specific actions.

As found in Psalms: “You have given them dominion over the works of your hands; you have put all things under their feet” (Psalm 8:6).

We will passionately seek justice for all as we are accountable to God for our stewardship of the earth.