Celebrating Juneteenth: Remembering the past while looking forward

“History despite its wrenching pain, cannot be unlived, but if faced with courage, need not be lived again.” -Maya Angelou

On January 1, 1863, the Emancipation Proclamation freed 3.1 million of the nation’s 4 million enslaved people. On June 19, 1865 enslaved Africans in the state of Texas and parts of Louisiana received word of their emancipation 2.5 years later. The celebratory date is known as Juneteenth (June plus nineteenth).  The date is honored by remembering the legacy of enslaved African ancestors, worship services, family gatherings and speaking out against racial injustices. Over the years, Juneteenth has become a widespread celebration in over 41 states. From formal gala events that raise funds for academic scholarships; to family day events filled with music and good BBQ; to soulful gospel Sunday brunches–Juneteenth calls us to remember the journey of the past while looking forward with hope for a brighter future. 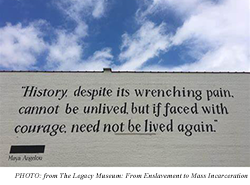 Four hundred years after the first arrival of enslaved Africans to Fort Monroe, Va. in 1619 in what would become the United States. America is just beginning to face the hidden truth of its painful past. I recently visited the Legacy Museum: From Enslavement to Mass Incarceration in Montgomery, Ala.  Located on the site of a former slave auction warehouse, the museum exists to break the silence and present the history of slavery from the perspective of enslaved people. Moving through the historical timeline of the domestic slave trade; to the creation of Jim Crow racial segregation; to remembering the victims of lynching; to the mass incarceration of black and brown bodies; the museum exposes the past and present realities of racism today. The Emancipation Proclamation might have legally ended the practice of chattel slavery, but racism has been described as the gift that keeps on giving.

As a descendant of enslaved Africans–it is my duty to never forget this history. It is my responsibility to work to end unjust policies, practices, beliefs and laws that continue to perpetuate racism within society and the church.  And it is my right to sing halleluiah in shouts of jubilation to the end of the most violent, oppressive, dehumanizing system of human bondage the world has ever known. For, “I am the dream and the hope of the slave” [from Maya Angelou’s poem “Still I Rise”].