In response to the United Nations’ Human Rights Council (UNHRC) urgent debate regarding racially inspired human rights violations, racism, police brutality and violence against peaceful protesters, an ecumenical call was issued. The ELCA joined the call on June 18 to establish an international commission of inquiry “into the on-going human rights violations of African descendant people in the United States and globally.” 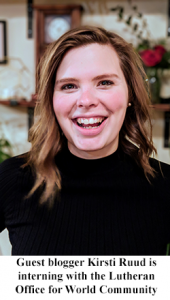 “As Christians believing in the love of God and the call for justice in the Judeo-Christian scriptures,” the joint statement proclaims, “we join with organizations around the world in calling for change and to the upholding of the human rights of African descent people.”

As an intern with the Lutheran Office for World Community, I have the incredible opportunity to “sit-in” on virtual meetings to observe the UN and civil society members actively wrestle with the world’s greatest challenges. An intersectional lens is largely maintained in conversations, making it clear that existing inequalities like racism and xenophobia create differentiated experiences within a crisis. Be the agenda refugee displacement, climate change, and/or COVID-19, existing inequalities too often lead to further oppression of the most marginalized. During the June 18 debate, all speakers condemned racism in all its forms as a scourge on society.

While recent world-wide demonstrations speak to the global nature of discrimination against and oppression of Africans and people of African descent, the African countries who collectively requested this specific urgent debate identified the murder of George Floyd by police and other human rights abuses within the U.S. as cause for international investigation. Condolences were expressed to George Floyd’s brother, Philonise, who had appealed to the Council at the onset: “I’m asking you to help me. I’m asking you to help us Black people in America.” There was also consensus regarding the need for international, national, and individual responsibility in order to eliminate the scourge.

Here, paths diverged. Supporters of the Africa group’s call for an international commission of inquiry highlighted the systemic nature of the problem and thus the failure of existing systems to successfully dismantle racism rooted in the U.S.’ long legacy of slavery and imperialism. Tendayi Achiume, the Special Rapporteur on contemporary forms of racism, racial discrimination, xenophobia and related intolerance, highlighted the ways in which existing UN mechanisms aimed at eliminating racism on a global scale are already over-burdened. “Failure to establish an international commission of inquiry,” she says, “would signal that Black lives do not matter, or that if they do, they do not matter enough to mobilize the Human Rights Council to intervene where it should.” Delegations expressing their opposition to creating a commission of inquiry emphasized the need to address racism globally rather than single-out a particular country. Historically imperial powers themselves and/or allies of the U.S., largely expressed confidence in the U.S. and its justice system to dismantle racism.

In the end, Council members compromised by adopting a resolution calling for the High Commissioner for Human Rights to “prepare a report on systemic racism, violations of international human rights law against Africans and people of African descent by law enforcement agencies, especially those incidents that resulted in the death of George Floyd and other Africans and of people of African descent, to contribute to accountability and redress for victims.” While this resolution falls short of the level of accountability many were calling for, it is a significant moment. As noted by Human Rights Watch in a Washington Post article, the resolution “nonetheless set the stage for an unprecedented look at racism and police violence in the United States — over the efforts of U.S. officials to avoid the council’s attention — and showed even the most powerful countries could be held to account.”

FROM GLOBAL TO INTERNAL

As I listened to the debate happening on the floor of the UNHRC in Geneva condemning institutionalized racism, I thought about the institutions of which I am part in the United States and the ways in which racism and anti-blackness permeate and fester in all areas of society, even within our houses of worship. Just June 17, the ELCA observed the five year Commemoration of the Emanuel Nine who were horribly murdered during a Bible study at the hands of an ELCA member and self-proclaimed white supremacist. Racism isn’t just everywhere, it’s right here.

My faith proclaims that Jesus not only stood in solidarity with the most marginalized, portraying an inclusive vision of the Kingdom of God, but he challenged, called-out, and was perceived as a threat by powers with a vested interest in maintaining the status quo. Too often, people like me (white, middle-class Christians) read Scripture and identify only with those in Jesus’ good favor and not with empire. Can we acknowledge that racism exists and that we benefit from white privilege? Can we face our comfort and really put ourselves out there, really confront the systems from which we benefit economically, socially and legally at the expense of Black, Indigenous and people of color? Acknowledging that we are a diverse community but still the whitest denomination in the U.S., what would it mean for me, for you, for the ELCA to truly be in solidarity with those in our community who black liberation theologian James Cone names in his book In his book The Cross and the Lynching Tree “the crucified people in our midst?”

CALLS BEYOND WORDS TO ACTIONS

I am proud that the ELCA stood in solidarity with the 54 African countries and over 600 human rights organizations calling for the UNHRC to strongly investigate racially inspired human rights abuses in the U.S. I am also heartened that the statement we signed includes asking members as individuals, churches, and communities to:

As several speakers noted in the urgent debate, it is critical that such statements do not remain in word alone. We must muster courage to put faith into action and follow the lead of Black, Indigenous and people of color in our community who have been taking action all along.

Creating God, we pray that you stir within us a courage to embrace your call for justice. Comfort those who are grieving. Help us to name racism as systemic sin and to challenge it boldly, even where it dwells in our own hearts. To those of us with the unearned privilege to ignore the pain, grief, and anger, may we feel implicated, connected, and transformed into action by the Gospel call to love our neighbor and challenge the powers that crucify. Amen