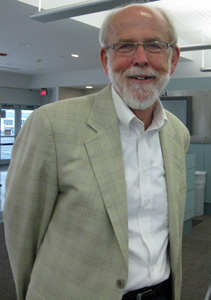 Bishop Mark Hanson was among the last to board an American Airlines flight out of New Orleans that left shortly before 5:30 p.m. today. He rode in coach seating.

Hanson, the presiding bishop of the Evangelical Lutheran Church in America, was mobbed by teens when he arrived at the airport. He posed for photographs with several of them.

The bishop and teens had been in New Orleans for several days for the 2009 ELCA Youth Gathering. Nearly 37,000 youth, leaders and chaperones attended the gathering, which is held every three years.

The bishop’s flight landed at O’Hare International Airport in Chicago a couple of hours later. He was last seen in baggage claim. END_OF_DOCUMENT_TOKEN_TO_BE_REPLACED