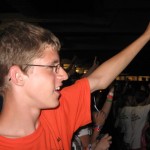 A note of thanks from U.S. President Barack Obama was read to Lutheran teens at the New Orleans Superdome tonight by the presiding bishop of the Evangelical Lutheran Church in America.

Obama praised the youth for their volunteer work this week helping with Hurricane Katrina recovery. The president, a former community service organizer, has urged young adults to be engaged in helping others.

Bishop Mark Hanson read Obama’s letter to the 37,000 youths and adults attending the 2009 Youth Gathering, an event held every three years by the ELCA. As part of the event, 12,000 youth were sent out daily on Thursday, Friday and today to perform community service projects.

“God bless you. God bless the United States of America,” the letter concluded. The teens cheered and applauded when the president’s name was read.

Obama’s letter wasn’t a complete surprise to the teens.  Patrick Allen, 18, of Richmond, Va., said he suspected all week that the president might speak at one of the events or at least speak to the group via a live broadcast.

“He’s so much about this kind of stuff,” said Allen, a member of Christ the King Lutheran Church, Richmond Va.

New Orleans May Ray Nagin addressed the youth in person this evening. He said the city had never had a group do “what you’ve done this week.”

The Youth Gathering has been the largest group booked in New Orleans since the hurricane devastated the city four years ago. The event concludes Sunday with a worship service.

Photo: Derek Anderson, 16, of Little Falls, Minn., enjoying a moment at Saturday’s gathering inside the Superdome.