They say that Lutheran youth have been gathering for more than 100 years, and they would be correct.

When the Evangelical Lutheran Church in America was formed in 1988, one of the practices passed on by the predecessor church bodies (American Lutheran Church – ALC and Lutheran Church in America – LCA) was the rich tradition of young people and their adult leaders coming together every three years to experience the love of Christ and to share their faith. Congregational youth groups would meet their peers in various settings, universities, and hotels, and spend several days focused on worship, workshops, music, and fellowship. 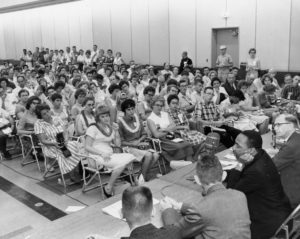 Before 1988, ALC and LCA Youth Gatherings occurred in Denver, CO; Banff and Alberta, Canada; Lafayette, IN; Houston, TX; Detroit, MI; New York City, NY; Seattle, WA; Missoula, MT; and Miami, FL. Probably the most notable keynote speaker was the Rev. Dr. Martin Luther King, who preached in front of 20,000 youth at the 1961 ALC Luther League convention in Miami [pictured]. I guess you can say that Youth Gatherings have always been on the cutting edge, challenging young people to do God’s most righteous work.

After the birth of the ELCA, Gatherings have been held in cities that could accommodate thousands of participants, while providing facilities for experiential learning along with a venue that could hold everybody at the same time for worship and other programming. Here is a list of the ELCA Youth Gatherings, with their themes: 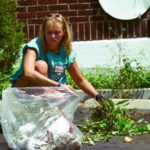 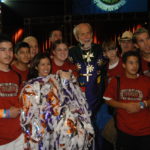 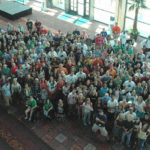 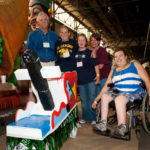 Many of you remember that the Gatherings in 2000, 2003, and 2006 were two-week, back to back, identical events. The rationale behind that was so that each Gathering week would be smaller (15,000 people rather than 30,000), making the event less crowded and more intimate. It also ensured that no congregation would be turned away for lack of sleeping space, as happened in New Orleans in 1997.  The formula worked well, but was ultimately financially unsustainable, so in 2009 we returned to the one week, one event model and welcomed 36,000 participants back to New Orleans.

Our demographics have changed, and the overall shrinking of mainline denominations may play a role in decreasing numbers of participants, but the ELCA Youth Gathering continues to capture the hearts and ignite faith in tens of thousands of people every three years.

Have you been to a Gathering? Will you join us in Houston in 2018? Over the next several months, we will be walking with you to help you prepare your youth for the journey. We are here for your questions, and hope you share your stories with us. We know anecdotally that the Gathering has inspired young people to go to seminary or otherwise consider a life in the church. The Gathering has also influenced many to carry out God’s work with their hands, out in the world as teachers, artists, or social workers. The Gathering reminds us that we need to stop, turn around, and look at the communities in which we’re planted, and make them better places.

We all know that it’s the work of the Holy Spirit – the Gathering is nothing that we do ourselves, on our own. There are a host of people throughout this country who give their time and talent to make the Gathering happen. Every youth leader is a worker in the field, so that each young person may awaken to new faith. I’m reminded of the words from the 2000 promo video: “You’d be surprised what we hear when you think we’re not listening.”

And God saw that it was very good.