God’s Love Changes Everything: Day Two of the Gathering

Transformative love was the theme of day two of the 2018 ELCA Youth Gathering.

On the first full day of the Gathering, Service Learning, Synod Day, Interactive Learning, and Community Life were in full operation. Makenna, 18, and Cosette, 17, of Mt. Carmel Lutheran Church in Milwaukee, WI were packaging children’s books at Blast off for Books. Makenna said packing the books for the local community was important because “I’m helping get books together so everyone can have access to reading them.” Cosette stated, “This is a good way to give kids an opportunity to gain knowledge and prepare for the future.”

Participants from Faith Lutheran Church in Glen Ellyn, IL had fun at Community Life. They were anticipating discussions that were taking place for their Synod Day. Their synod, Metropolitan Chicago Synod, were going to talk about current immigration issues in the United States and how the church is called to respond. 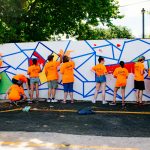 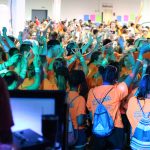 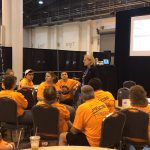 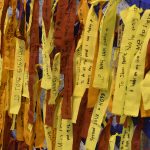 The many activities of the day led to the second Mass Gathering. Caroline Meeker opened the Mass Gathering by sharing her battle with anorexia, a disease for which she was hospitalized at the age of nine.

“I couldn’t stop the voice in my head telling me not to eat,” she said. “I was literally disappearing, physically and mentally.” In the hospital, receiving nutrition from a feeding tube, Meeker felt like she’d lost everything.

As she recovered, she began noticing God. “God was there in my family, church and friends. God was everywhere,” Meeker told youth. The experience helped her see God doesn’t give us hardships, but “God promises to be there.”

Grant, 17, from Our Savior’s Lutheran Church, Barnesville, Minn., said Meeker’s story made him realize, “God doesn’t judge you by how you look, but how you act, how you feel and believe in him.” 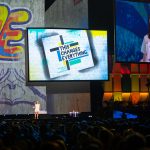 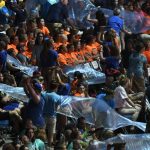 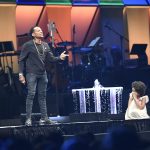 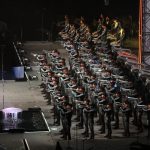 Other highlights included musical performances from Ryan Brown, Rachel Kurtz and Guardian Drum and Bugle Corps. “I thought the music tonight was phenomenal,” said Luke Thomsville, 17, also from Our Savior’s, Barnesville, Minn. “Each of the individual singers had their own moments. I loved the traditional Mexican dancing and the drumline at the end.”

Deacon Erin Power spoke about the importance of finding a church home and how we are called to express and embody such a home for a world in need. Power hoped that participants would go home with the realization that “Our call as the church is to embody radical hospitality and we need to proclaim this message.”

Youth were also moved by Reverend Aaron Fuller’s heartfelt speech about his ministry as a wrestling coach and Navy chaplain. Fuller only became a pastor recently, after working as a Naval Officer and struggling with his own demons related to his identity.

“I used to keep people at a distance,” he told youth. “What changed? In my own life, my own dark moments, people walked alongside me. The thing I was going through never scared them.” Today, as a chaplain, Fuller accompanies sailors and wrestlers as they wrestle with life’s ups and downs.

“The world needs us to be courageous and walk alongside others in [dark] moments,” he said. “What they don’t need us to do is fix their problems and save their world. What they do need is love.” Fuller’s hope was that those attending the Mass Gathering would have the “courage to see suffering in the world, not turn away and enter into it.”

Fuller’s story left an impact on Nicholas Blonstein, 18, from Grace Lutheran Church, Palo Alto, Calif. “This meant a lot to me today,” he said. “People have struggles in their lives that we don’t always realize. People aren’t always what they seem in the outside. Just standing with those people (when they struggle) is enough.”

Houstonite and storyteller Marlon Hall closed out the evening by blessing ELCA youth with a message of love—and a call to action.

“You were born to make an indelible mark on the world that no one can erase,” he said. “If you don’t make that mark that mark won’t be made. You make this mark by the love of God.”

Hall spoke about his and his partner’s hardships during their eight-year struggle to conceive. Then he welcomed his daughter, Phoenix to the stage. He said his daughter is “now and forever a physical manifestation to me that God’s love isn’t earned, it’s welcomed.”

Hall then shared a story about an encounter with Joe, a man who transformed Hall’s vision of love. Joe took Hall’s phone from a convenience store, then returned it to Hall in the parking lot as though it was a gift. “Joe was trying to give me a blessing that I already had,” he said. “So is true with the love of God.”

This idea really resonated with Taylor Hohenbrink, 17, from Hope Lutheran Church, Fresno, Calif. She said Hall showed her, “You can’t be given God’s love because you already have it.”