Far more than we dare ask or imagine

“God’s power at work in us can be far more than we dare ask or imagine.”

I couldn’t breathe. It was minutes before I was to be ushered in front of thousands of excited teens for the 2018 ELCA Youth Gathering in Houston, Texas. It would be the most vulnerable I have ever been to such a large crowd of strangers. I felt paralyzed, the words had run out of my head, my heart was pounding, palms sweating, fear course through my veins. 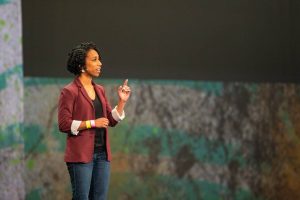 As I waited backstage, a friend walked over, saw the nervousness in my voice and body, grabbed my hands and we prayed. The cacophony of screaming youth dissipated into the background and a calm swept over me. The Holy Spirit was so present and palpable in that moment, that I knew that everything was going to be alright. We said “Amen”, the music came on, I took a breath, I walked into the bright lights and began.

I thought that I was standing up there all alone and vulnerable. But I was actually surrounded by the manifestation of Gods love and grace; I was in the midst of Gods people – feeling the boundlessness of love all around me. In that moment I felt the Holy calm that comes from a life filled with all that God is. The Spirit flowed through me with every breath, it was life giving and freeing.

I had been given a once in a lifetime opportunity to share a story about the limitlessness of Gods grace in our lives. I had the chance to be a part of an amazing experience in the life of our youth, but what I received in return was greater than I could have imagined. I had been given the chance to witness Gods church gathered together, love filling the space from the floor to the ceiling, and grace beyond measure. 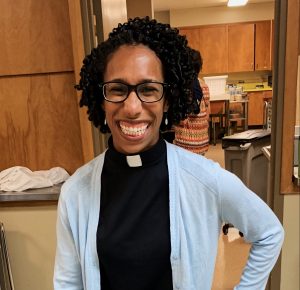 Elizabeth Peter is an ELCA Candidate of Word and Sacrament at United Lutheran Seminary. She’s very excited to have served on both the 2015, 2018 Youth Gathering Planning teams, as well as the 2021 Mass Gathering team. She loves to cook, cycle, and sing any chance that she gets!