As I mulled over how to respond to the topic of climate and racial justice, I knew that if I merely wrote out a response it would become a piece of academic prose with facts. But in this time of Lent, we already know the facts: we already know that our Earth is in trouble, that racism plays out in systems and structures that disembody black and brown lives and the body of Christ itself, that we as human beings can’t seem to get along, that there is evil embedded in every single system of our country and our world, and yet God intends for this world to be one committed to justice-seeking love rooted in the promise of the resurrection.

Instead of writing out a response in succinct, beautiful paragraphs, I have decided to write a poem in order to lament, fast, and give alms this Lent.

12 For just as the body is one and has many members, and all the members of the body, though many, are one body, so it is with Christ. 13 For in the one Spirit we were all baptized into one body—Jews or Greeks, slaves or free—and we were all made to drink of one Spirit.

27 Now you are the body of Christ and individually members of it.

A slam poem for racial and environmental justice

In these 40 days of Lent

we take up the disciplines of alms giving, prayer, and fasting.

You see, as a kid

I was focused on my own prayers, my own fasting, my own giving to “the poor”

As I talk with youth today, I hear palatable devastation and anger in the same breath.

You see, our young people are growing up in a time where their lives and the ecosystems of this world are not guaranteed.

And it’s not like there is a “Planet B”

Young people grow up in a time where they do not suffer the effects of climate change,

they will operate within frameworks of fear as they muster up

enough courage to go to school every day

and pray there is not another school shooting, or a shooting at a place of worship, or a shooting late at night with a ricocheted bullet that claims the life of a child.

Black and brown youth are forced to grow up in un-maintained and uncared for “affordable housing.”

Oh, and to remind them who they are in the US of A,

oil refineries, lead, and gas-guzzling semis in their communities.

In other words, we disregard black and brown people like we discard our trash, our dispensables, our by-products of greed and self-centeredness.

In this increasing movement for environmental justice, as people of faith,

let us take seriously the disciplines of Lent

as a beloved community beyond our tendency to do so as individuals.

It is this collective alms giving, prayer, and fasting

As a church deeply committed to anti-racism work and creation care,

in weaving these stories together.

As an “older youth,” in this season of Lent,

I repent of my complicitness and desire for plastic and fossil fuels.

We repent that we have not lived up to our covenant in Genesis to maintain and preserve creation.

We repent that we have not listened to our youth

And to indigenous ways of knowledge with regards to living in balance with creation.

I repent that I have only fixated on sources of knowledge in the environmental justice movement who are white.

We repent that structures of power maintain white supremacy in order to keep us from witnessing the oppression of black and brown lives.

I repent that I have only listened to Greta Thunberg.

As an “older youth,” in this season of Lent,

I also take-up the practices of prayerfully listening and expanding my creation of justice worldview.

We will listen and pass the mic to young black and brown environmental and racial justice activists.

We will listen and cultivate authentic relationships of solidarity. 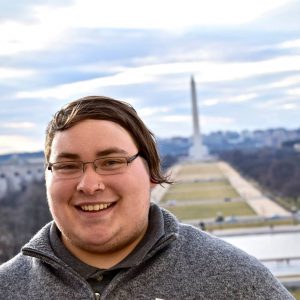 Wylie Cook (they, them, their’s) is currently a seminarian attending Pacific Lutheran Theological Seminary in Berkeley, CA. Wylie has advocacy experience in various areas but specifically, the gender and racial nuances of policy. Wylie interned at the ELCA Advocacy office in Washington, D.C. and has most recently come from working with the Lutheran World Federation’s delegation to the United Nations Climate Change negotiations in Poland. While studying to become a Lutheran pastor, Wylie engages in advocacy and activism that is rooted in and informed by Lutheran liturgy, theology, ethics, and tradition. Wylie also serves on the policy council for the Lutheran Office for Public Policy- California. In their free time, Wylie loves to travel and visit family and friends around the nation, sing in choir, and cuddle with their Miniature Pinscher, Cosmo.