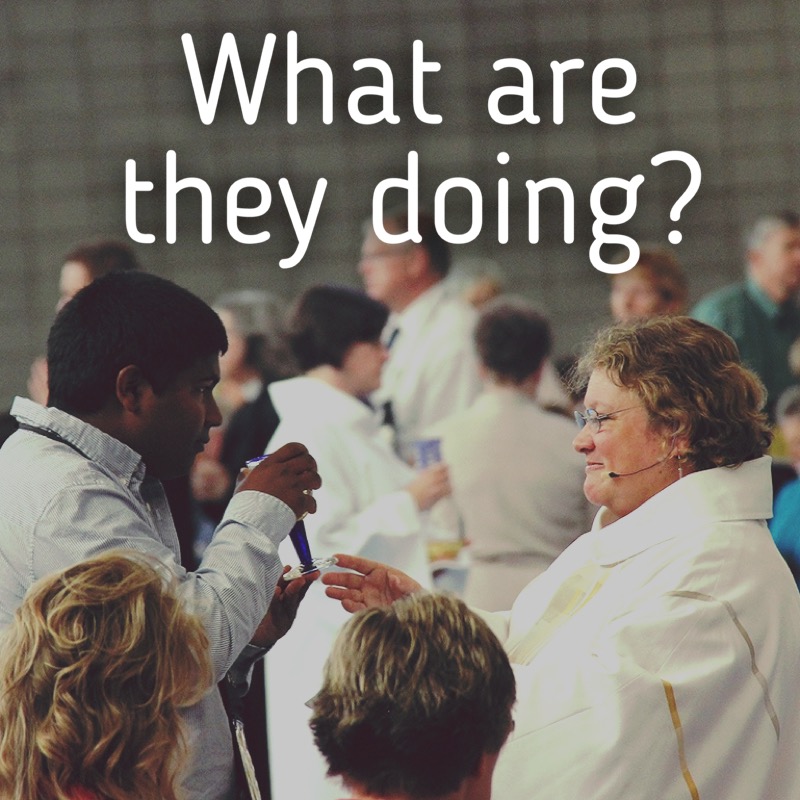 As Lutherans we believe that Jesus Christ is truly present in the meal we call Holy Communion. This holy mystery calls for reverence, care and pastoral wisdom in the practices surrounding its distribution. As set forth in the Evangelical Lutheran Church in America’s set of priorities for the practices of word and sacrament, The Use of the Means of Grace,

Practices of distributing and receiving Holy Communion reflect the unity of the Body of Christ and the dignity and new life of the baptized (Principle 45).

How is wine distributed?

The question of wine distribution is less straightforward and more controversial than the same question for bread. We will highlight the three most prevalent practices: common cup, individual glasses and intinction.

(In this post, which is excerpted from the ELCA Worship FAQs, we will only look at the various ways wine is distributed during communion. For a discussion of bread as well, please refer to the complete FAQ, “How do we distribute Holy Communion?”)

The oldest practice associated with partaking the wine is to drink from one cup. Like eating the bread from one loaf, the one cup symbolizes our unity in Christ.

Authors of The Sunday Assembly, a companion volume to Evangelical Lutheran Worship, note that this practice began to abate in the beginning of the twentieth century, most likely a result of concerns about hygiene.

However, evidence seems to show that when used properly, this method is actually the most sanitary method of distributing the wine, especially if wine glasses are pre- filled or intinction is practiced (see below). The latter practices involve much more use of the hands, which are “the most frequent source of passing pathogens, not our mouths” (The Sunday Assembly, p. 193).

How is wine distributed from a common drinking chalice?
From The Sunday Assembly: “The minister of the chalice will usually hold the middle or node of the chalice stem by one hand, presenting the cup near the person’s mouth and allowing the communicant to tip the chalice to his or her lips while holding on to the base. The communion minister uses the purificator, held in the other hand, to wipe the outside and inside of the lip of the chalice while, at the same time, rotating the cup to present it to the next communicant” (216).

If congregations use individual glasses, it is advised to pour during distribution rather than pre-filling them. As stated in The Sunday Assembly: “This practice will maintain the symbol of the cup, make the altar less crowded, make caring for what is left over much easier and more reverent, and actually result in a healthier practice than is possible with pre-filled glasses” (193).

How is wine distributed from a pouring chalice?
From The Sunday Assembly: “In assemblies using small glasses, the minister with the cup must pour carefully into the small glass, afterward touching the spout of the chalice with the purificator to catch any stray drops.” (216)

Intinction refers to the process of receiving the bread or host and dipping it into the wine. This method is typically commended for its convenience. While this process seems less complicated one most consider its limitations.

When we eat and drink a meal in everyday life, we eat and then drink. We rarely dip our bread in our wine. It is easier to understand communion as a meal when we are eating and drinking.

This method is likely to be more unsanitary because many hands can touch the cup. There is also the issue of pieces of bread floating in the wine, a problem if this chalice is also used as the drinking chalice. It may be preferable to use hosts/wafers for intinction or to have a separate chalice for intinction.

Again, Lutherans do not dictate a manner of eating or drinking, but it is important to carefully consider how and why we do what we do. (See The Sunday Assembly, 192- 194).

Of Light, Blessing and S’mores: Epiphany at Trinity | A Place of Refuge and Rest