ELCA Blogs / ELCA Worship / The Push and Pull of Fathers’ Day: A Reflection on Being Church Together

The Push and Pull of Fathers’ Day: A Reflection on Being Church Together 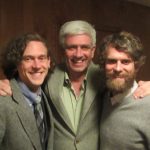 The quirks of our family schedule meant that we were often on vacation in the middle of June. So, after a day of hiking or canoeing or biking, we’d be sitting around the table enjoying some grilled hamburgers and one of our sons would say, “Oh, Dad! By the way, Happy Father’s Day!” It was more a sign of busy fun than a lack of care.

For many families, and I suspect many congregations, Father’s Day carries a different feel and different expectations than Mother’s Day. Still, congregational leaders may feel the pressure to put this cultural holiday front and center. And that pressure may be accompanied by expectations to hold up some sentimental image of fatherly perfection.

If that’s the image you want to project, then stay away from the Hebrew and Christian scriptures where the icons of fatherhood are a bit tarnished. Abraham was at the altar with a knife over his head about to engage in child sacrifice. The young boy on the altar became the old man Isaac who was duped by the younger of his twin sons into giving away the family inheritance. Or how about Eli, the high priest who is depicted as unable to control his unruly sons who were reported to “lay with the women who served at the tent of the meeting.” What to do with the fact that Jesus’ own father is hardly mentioned after the infancy and childhood stories.

Add to this the fact that for far too long in the church, “Father” has been nearly the only way we refer to God. It’s language that is carved in the stone of the three ecumenical creeds. Is this what has led us to the popular view of God as an elderly man in a white robe with a long beard who sits on a cloud benignly watching over things?

So, if the biblical record and church history give us a mixed record of what to celebrate on Father’s Day, what shall we do?

For one thing, Father’s Day ought not to be first, front, or center, which is a general rule for any cultural holiday that we decide needs at least to be mentioned in worship. Let the lessons for the day govern the theme and the proclamation of the gospel for the day.

Then, let whatever mention there is of Father’s Day have the ring of truth and honesty about fathers. In fact, the imperfections of the fathers in our biblical stories remind us that all fathers bring their simul justus et peccator brokenness and baptismal new life to the fatherly vocation. We give thanks for the gift of those who have fathered well, whether they happen to be our biological fathers or not. We acknowledge the hurt of those who have not been fathered well. And we all confess our sin and brokenness. Such both/and acknowledgment might be made in the Confession and Forgiveness or in the Prayers of Intercession.

Maybe a hymn during distribution can give a nod to the fatherly vocation. Consider singing the hymn,“Our Father by Whose Name” (ELW #640, text by F. Bland Tucker). This short 3 stanza hymn offers a sung prayer for fathers, mothers, and children, and points us to the work of the Spirit who binds us together in bonds that are stronger than flesh and blood.

And maybe that’s most important gift to which Father’s Day points. Our relationships in the body of Christ and the mission to which we have been called together are front and center for the entire ordinary season; they are the gifts that we will celebrate and reflect on not for just one day, but for as long as we are church together.