Pray for Gaza and Southern Israel 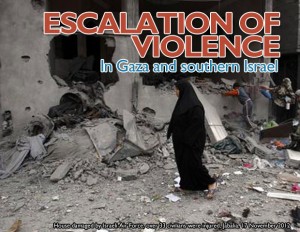 Our thoughts and prayers are with the people of Gaza and Southern Israel, as escalated violence has claimed many lives and brought devastation to a beleaguered region.  110 Palestinians and 3 Israelis have been killed, hundreds wounded and enormous devastation of infrastructure and housing in Gaza has occurred.

The Association of International Development Agencies, 44 aid agencies operating in the occupied Palestinian territories and Israel that includes The Lutheran World Federation, has called upon all sides to end the violence as a humanitarian disaster is in the making:

As the impact of days of violent escalation worsens for civilians in Gaza and in Israel, a group of 44 aid and development agencies today urged world leaders to take swift action to enforce a ceasefire in order to protect civilian lives and infrastructure and prevent another widespread humanitarian disaster in Gaza brought on by a prolonged military confrontation.

The agencies said the international community must apply immediate pressure on the government of Israel to keep the crossings to Gaza open to allow in supplies of essential humanitarian aid and push all parties to the conflict to end violence and uphold their obligations under International Law.

The National Coalition of Christian Organizations in Palestine has also released a statement calling for a halt to the war against Gaza and an end to the 5-year Israeli siege of Gaza which the statement  says is the underlying cause of the violence.

Meanwhile, talks of a cease-fire are rumored as US Secretary of State Hillary Clinton flies toward the region.

Read more about the escalation of violence and the 5-year siege of Gaza.