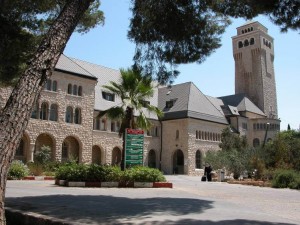 Augusta Victoria Hospital on the Mt. of Olives in Jerusalem is the only facility available in the West Bank for pediatric dialysis and state-of-the-art radiation oncology treatment.

Six hospitals in East Jerusalem, including the Lutheran World Federation’s Augusta Victoria Hospital, face difficulties because of the Palestinian Authority’s financial crisis.   The PA is dependent upon foreign aid, which has been reduced from the Gulf States and Washington.  Washington withheld $192 million because President Abbas has said he would continue to strive for observer status at the UN.  The PA has built up debts of $18 million to the specialized healthcare centers this year.  The World Bank forecasts a $1.5 billion deficit in the 2012 PA budget due to the shortfall in foreign aid.

“The moment the PA faces any financial difficulty, it stops paying. But the hospital must still take in patients,” Tawfiq Nasser, head of the Augusta Victoria Hospital, told Reuters. “We can no longer offer the same services and that is putting patients at risk, endangering their lives.”

The East Jerusalem hospitals signed agreements with the PA in 1997 to admit patients from the West Bank and Gaza according to specialist referral. Costs were to be paid every month.  Ten months ago, the money stopped but patients kept coming.