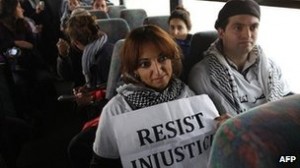 Palestinian "freedom riders" are arrested when they board buses reserved only for Israelis.

Earlier today, seven Palestinian Freedom Riders were violently arrested while attempting to ride on segregated Israeli public transportation transporting settlers from inside the West Bank to occupied East Jerusalem in an act of civil disobedience inspired by the Freedom Riders of the U.S. Civil Rights Movement.

Inspired by the Freedom Rides of the Jim Crow American South and asserting their own aspirations for freedom, justice and self determination, six Freedom Riders boarded a settler bus at 3:30 pm in the occupied West Bank near the illegal Jewish-only colony of Psagot.

In a scene reminiscent of the early U.S. civil rights movement, border police and army surrounded and shut down Jerusalem Bus 148, blocking the Freedom Riders at the Hizmeh checkpoint. The action clearly highlights the injustice and dispossession that Palestinians face under Israeli occupation and apartheid. The six freedom riders who boarded the bus originally as well as an additional rider, were arrested and are currently at the Israeli Atarot police station.

Badee’ Dwak from Hebrom, who was arrested during the ride ,said: “The companies operating Israeli buses, like Egged and Veolia, are directly complicit in Israel’s violations of our rights. They transport settlers in and out of our occupied land, on roads that we often can’t use into places that we can’t reach, including Jerusalem.They need to be divested from and boycotted. Not just here, but around the world. It is a moral duty to end complicity in this Israeli system of apartheid.”

Human Rights Watch in December 2010 released a 166-page reporti on the “two-tier” system that Israel administers in Area C and East Jerusalem.  It makes clear that Israel’s legal system enables and facilitates the theft of Palestinian land and openly discriminates against Palestinians.  West Bank Palestinians are prohibited from driving on certain roads and are limited in their housing choices.  Police and army brutality are a fact of life.

Huwaida Arraf also among those arrested, stated, “The US. Congress repeatedly claims it is for the rights of people around the world facing oppression and injustice. But when it comes to Palestinian rights and Israel’s decades-old denial of them they are notably silent.  In fact, they continue to provide Israel with the most deadly weapons, money and diplomatic cover to maintain its oppression and protect it from international sanctions. Too many lack the courage to even criticize Israel for the racism on display here today.”

Basel al-Araj commented prior to his arrest: “The settlers are to Israel what the KKK was to the Jim Crow South – an unruly, fanatic mob that has enormous influence in shaping Israeli policies today and that violently enforces these policies with extreme violence and utter impunity all over the occupied Palestinian territory, especially in and around Jerusalem.”

Hurriyah Ziada, one of the event’s organizers said: “Israel’s occupation and apartheid system must end and all of Israel’s Jewish-only colonies that sit on stolen land must be dismantled. As the Arab Spring spreads across the region, rekindling hope for freedom, social justice and democracy to replace tyranny and repression, we struggle on the ground for the basic, comprehensive rights of the entire Palestinian people. We call on people of conscience around the world to compel Israel into complying with international law by applying creative, sustainable, and context-sensitive boycott, divestment and sanctions (BDS) initiatives. We too deserve freedom and justice.”

“Board the buses to Everywhere.  Sit freely.  Go into Jerusalem with my blessing. Like many of my country people, I have witnessed this scenario before and know where it can lead.  To a straightening of the back and a full breath taken by the soul. Some of us have shed blood, others have shed tears.  Some have shed both. All sacred to the cause of the dignity we deserve as beautifully fashioned citizens and Beings of this Universe.”

Renowned US. Civil Rights activist and former Black Panthers leader Distinguished Professor Emerita Angela Davis wrote:
“Palestinian Freedom Riders poised to collectively resist Israeli apartheid are inspired by the fifty-year-old legacy of U.S. Freedom Riders, whose bold defiance of Jim Crow laws in the South helped to dismantle legal structures of racism.  All those who celebrate the achievements of the Civil Rights Era should be prepared to stand in solidarity with our Palestinian sisters and brothers today.”

Background
Several Israeli and transnational companies, among them Egged and Veolia, operate dozens of lines that run through the occupied West Bank (including East Jerusalem), many of them subsidized by the state. They run between different Israeli illegal settlements, connecting them to each other and to Israel. Some lines connecting Jerusalem to other cities inside Israel, such as Eilat and Beesan (Beit She’an), are also routed to pass through the West Bank.

Almost no limitations are imposed on the freedom of movement of Israelis in the occupied Palestinian territory. On the contrary, the Israeli government allows and even encourages its citizens to settle in the West Bank (especially in and around East Jerusalem), in violation of international law. Palestinians, in contrast, are not allowed to enter Israel without procuring a rarely granted special permit from Israeli authorities. Even Palestinian movement inside the Occupied Territory is heavily restricted, with access to occupied East Jerusalem and some 8 percent of the West Bank in the border area also forbidden without a similar permit.

While it is not officially forbidden for Palestinians to use Israeli public transportation in the West Bank, these lines are effectively segregated, since many of them pass through Jewish-only settlements, to which Palestinian entry is prohibited by military decree. This is one aspect of Israel’s regime of occupation, colonialism and apartheidii against the Palestinian people.

The buses that the Freedom Riders boarded are operated by Egged, the largest Israeli public transportation company. Another prominent public transportation company in the Occupied Territory is the French transnational company Veolia. Both companies are complicit in Israel’s violations of international law due to their involvement in and profiting from Israeli’s illegal settlement infrastructure. Palestinian Freedom Riders endorse the call for boycotting both companies, as well as all others involved in Israel’s violations of human rights and international law.iii

In July 2011, an Egged subsidiary won a public tender to run bus services in the Waterland region of the Netherlands, north of Amsterdam. The company makes money from trampling on the rights of Palestinians and has been a target of the boycott, divestment and sanctions (BDS) campaign, which is endorsed by an overwhelming majority of Palestinian civil society. The Freedom Riders call on the people of the Netherlands to sever all dealings with companies, like Egged, involved in human rights violations.

Veolia has been a target of an international divestment campaign for running bus lines through the West Bank connecting illegal Israeli colonies to Jerusalem and for its involvement in the Jerusalem Light Rail which connects illegal settlements in and around occupied East Jerusalem to the western part of the city, thereby directly servicing the settlement enterprise.iv

Israel has laid its military control over 42 percent of the occupied West Bank for the building of illegal Jewish settlements and their associated regimev (including the wall which was declared illegal by the International Court of Justice in 2004), depriving local communities of access to their water resources as well as agricultural lands. Settling Israelis in the occupied Palestinian territory constitutes a war crime according to the Fourth Geneva Conventionvi and the Rome Statute of the International Criminal Court.vii

Settlements’ infrastructure includes hundreds of kilometers of segregated roads that are forbidden for Palestinians to use. They carve deep into the West Bank further separating Palestinians and their cities and villages from each other.

ii In its most recent session in Cape Town, South Africa, the eminent jury of the Russell Tribunal on Palestine concluded that, “Israel’s rule over the Palestinian people, wherever they reside, collectively amounts to a single integrated regime of apartheid.” http://www.russelltribunalonpalestine.com/en/sessions/south-africa

v B’tselem Report: “By Hook and By Crook, Israeli Settlement Policy in the West Bank, July 2010; summary available at: http://www.btselem.org/publications/summaries/201007_by_hook_and_by_crook.

vi See “Israel’s settlement policy is a war crime under the Fourth Geneva Convention,” The Palestinian Center for Human Rights, Gaza, highlighting the relevant articles of the Fourth Geneva Convention to support the determination that settlements are a war crime, at http://www.pchrgaza.org/Intifada/Settlements.conv.htm; see also “Demolitions, new settlements in East Jerusalem could amount to war crimes – UN expert,” UN News Centre, June 29, 2010, at http://www.un.org/apps/news/story.asp?NewsID=35175&Cr=Palestin&Cr1.

vii Article8(2)(b)(viii) of the 2002 Rome Statute of the International Criminal Court prohibits “[t]he transfer, directly or indirectly, by the Occupying Power of parts of its own civilian population into the territory it occupies.”