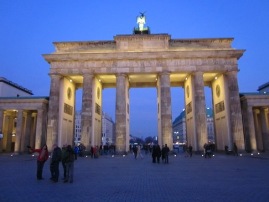 The Brandenburg Gate in Berlin used to separate East and West Berlin. Now thousands walk under and through it, able now to pass freely from one side to the other since the Wall came down in 1989.

Today I stood, as if I could hear voices from the past, present and the future of both horror and hope, but hope won.  For today I walked through the Brandenburg Gate, which used to separate East from West Berlin as one of the most famous places in the Berlin Wall.  I remember standing there in 1980, looking at the sign that said “Attention, you are leaving West Berlin,” horrified by Checkpoint Charlie and the feeling of oppression being subjected to soldiers with machine guns ruling over life in East Berlin.

And I found President Reagan’s words from the past:

Today (1987) I say: as long as the gate is closed, as long as this scar of a wall is permitted to stand, it is not the German question alone tht remains open, but the question of freedom for all mankind.  Yet I do not come here to lament.  For I find in Berlin a message of hope, even in the shadow of this wall, a message of triumph….

So I stand tonight to salute all those Palestinians, Israelis and internationals – and there are many – whose collective voice will one day overshadow the wallbuilders and the settlement expanders and the rocket launchers.  Don’t give up, even in the face of evidence that that wall – and injustice and oppression and fear – will stand forever scarring your land.  It won’t, there are too many working and praying and yearning for freedom and truth to win the day.

Can you not almost hear the cry from the future:  and they said it couldn’t be done!