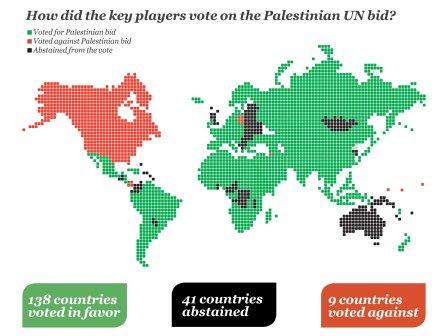 In an historic vote at the United Nations Thursday, Nov. 29, exactly 65 years after passing the Partition Plan for Palestine, the General Assembly voted by a huge majority to recognize Palestine within the 1967 borders as a non-member state with observer status in the UN.  138 countries voted in favor of the resolution, 41 abstained and 9 voted against: Canada, Czech Republic, Israel, U.S., Panama, The Marshall Islands, Palau, Nauru, and Micronesia.

The support of the countries of the world for our endeavor is a victory for truth, freedom, justice, law and international legitimacy, and it provides tremendous support for the peace option and enhances the chances of success of the negotiations. Your support for the establishment of the State of Palestine and for its admission to the United Nations as a full member is the greatest contribution to peacemaking in the Holy Land.

The US opposed the move, with Secretary of State Hillary Clinton calling it “unfortunate and counterproductive.”  U.S. UN envoy Susan Rice said the resolution does not establish Palestine as state, that it prejudges the outcome of negotiations, and ignores questions of security.

Israeli Ambassador to the UN Ron Proser responded to President Abbas’ speech, saying  “the UN was founded to advance the cause of peace. Today the Palestinians are turning their back on peace. Don’t let history record that today the UN helped them along on their march of folly.”

Prime Minister Netanyahu’s office released a statement saying the world had watched a speech “full of dripping venom and false propaganda against the IDF and Israeli citizens. This is not how someone who wants peace speaks.”

An Israeli spokesman announced on Friday that Israel will build 3000 new housing units in the illegal settlements in the West Bank and East Jerusalem, and that it will advance plans for the controversial E1 area outside Jerusalem.  If the E1 settlement plans are fully developed by Israel, it would threaten the contiguity of any future Palestinian state by virtually cutting the West Bank into northern and southern portions.

Other reactions to the vote:

World weighs in on UN Palestine vote
World headlines showed a mix of emotions – but a lot of common ground on how much impact this may have on prospects for peace.
http://www.csmonitor.com/World/terrorism-security/2012/1130/World-weighs-in-on-UN-Palestine-vote

After Vote, Palestinians and Israel Search for the Next Step
http://www.nytimes.com/2012/11/30/world/middleeast/palestinians-and-israel-seek-next-step-after-vote.html?ref=middleeast

Supporting Palestine at the UN today is a vote for peace in the Middle East by Hanan Ashrawi
http://www.guardian.co.uk/commentisfree/2012/nov/29/supporting-palestine-un-vote-for-peace