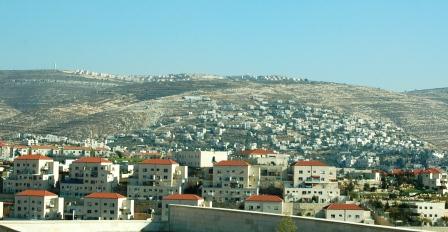 Illegal Israeli settlements are scattered throughout the West Bank, housing more than 500,000 Jewish settlers. Often, land will be taken from Palestinian villages like the one shown in mid-photo for settlements like the one in the foreground and the one on the hill.

The Jerusalem Municipality is expected to give final approval for a new settlement called Givat Hamatos near Bethlehem and Beit Safafa. It will be the first completely detached settlement built within the Green Line since Har Homa near Bethlehem. Givat Hamatos A, one of four stages, will have 2,610 housing units. The approximately 4,000 units in the full plan include around 800 units for Palestinian homes built inside Beit Safafa.

According to an article in the Jerusalem Post, it was slated for approval by the Jerusalem Municipality two weeks ago but then tabled when US Secretary of State Hillary Clinton came to town to mediate the Gaza conflict. Approval is now expected in a few weeks.

This comes at a sensitive time when Israel has just announced plans for 3,000 new settlement units in the eastern part of Jerusalem, including going ahead with previously frozen plans to develop the controversial E1 territory. If developed, E1 would virtually cut the West Bank in two and, some say, make a two-state solution impossible.

But veteran Jerusalem activist Danny Seidemann said that Israel’s plans for 7,770 new settlement units around Bethlehem (in Gilo, Har Homa and Givat Hamatos) in the southeast of Jerusalem would be “just as devastating” as E1 because it would cut off Jerusalem from Bethlehem.  Listen to his interview with NPR’s Morning Edition.  Seidemann states:

Jerusalem City Councilor Elisha Peleg (Likud), who is on the Local Planning and Building Committee, said:

I don’t think any European country or the US would like it if we got involved with their internal matters. They don’t have a right to do this. These places are in full Israeli sovereignty. We have to be strong and to continue to build in Jerusalem as much as possible, in order to create facts on the ground that we’re not giving up on Jerusalem.

Israel has stated that settlements are designed to achieve its long-term security  and to provide needed affordable housing for its natural growth.