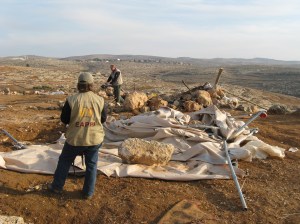 Another home demolition in Palestine, photo by Chris Cowan

A new report by the European Union leaked to journalists says that the possibility of a two-state solution is getting more and more remote as Israeli policies of population transfer and demolition of homes continue.  An article by the Israeli newspaper Ha’aretz says that “the report stated that Israeli policy in Area C ‘results in forced transfer of the native population,’” which is illegal under the Geneva Conventions and other international laws.

In another article on the report in the UK Independent, it claims “the 16-page document is the EU’s starkest critique yet of how a combination of house and farm building demolitions; a prohibitive planning regime; relentless settlement expansion; the military’s separation barrier; obstacles to free movement; and denial of access to vital natural resources, including land and water, is eroding Palestinian tenure of the large tract of the West Bank on which hopes of a contiguous Palestinian state depend.”

The article describes what’s in the report:

“It says the EU needs “at a political” level to persuade Israel to redesignate Area C, but in the meantime it should “support Palestinian presence in, and development of the area”. The report says the destruction of homes, public buildings and workplaces result in “forced transfer of the native population” and that construction is effectively prohibited in 70 per cent of the land – and then in zones largely allocated to settlements of the Israeli military.

In practice, it says Palestinian construction is permitted in just 1 per cent of Area C, “most of which is already built up”. The EU report’s short- and medium-term recommendations include calling on Israel to halt demolitions of houses and structures built without permits – of which there have been 4,800 (in Area C alone) since 2000. But there is also a call for the EU to support a building programme that includes schools, clinics, water and other infrastructure projects.

The EU should also be more vocal in raising objections to “involuntary population movements, displacements, evictions and internal migration”.

For stories on the ground, see the blogs of recent and current US Ecumenical Accompaniers Chris Cowan and Tammie Danielsen.  Chris served in Hebron and the Southern Hebron Hills area last year and Tammie is serving there now through the US Program of the Ecumenical Accompaniment Programme for Palestine and Israel, a peace program begun by the World Council of Churches.