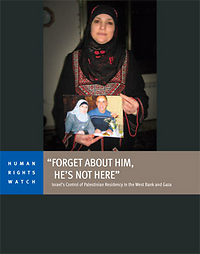 Israeli policies on Palestinian residency have arbitrarily denied thousands of Palestinians the ability to live in, and travel to and from, the West Bank and Gaza, Human Rights Watch said in a report released today. Israel should immediately stop denying or cancelling the residency of Palestinians and close family members with deep ties to the West Bank and Gaza, and end blanket bans on processing their applications for residency.

The 90-page report, “Forget about Him, He’s Not Here,” describes the arbitrary exclusion by the Israeli military of hundreds of thousands of Palestinians since 1967 and documents the impact that exclusion continues to have on individuals and families. The way Israel’s military has exercised its control over the Palestinian population registry – the list of Palestinians whom it considers to be lawful residents of the West Bank and Gaza territories – has separated families, caused people to lose jobs and educational opportunities, barred people from entering the Palestinian territories, and trapped others inside them, Human Rights Watch said. Egypt also has problematic policies on Palestinians trying to enter Gaza that are based on the Israeli-controlled population registry.

View Forbidden Family, a video of the family of the ELCJHL’s Redeemer Church organist in Jerusalem.  He is a Jerusalem resident living with his West Bank wife who has had to deal with these residency issues.