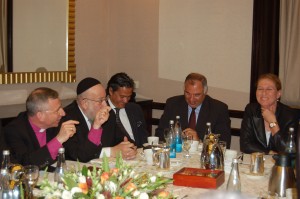 CRIHL members met with then Israeli Foreign Minister Tzipi Livni in 2008 to present a united call against violence of all kinds.

The United States Institute of Peace (USIP) is pleased to host a distinguished delegation from the Council of Religious Institutions of the Holy Land (CRIHL): the consultative body that comprises the most senior official Israeli and Palestinian religious leaders. CRIHL was established as the implementing body of the historic declaration signed in Alexandria, Egypt in 2002 in which Israeli and Palestinian religious leaders pledged to work together to end the violence and promote peace. Since the signing of the Alexandria Declaration, USIP has provided strong support to ongoing efforts to implement the document’s goals.

This event will feature the following speakers: