The World Council of Churches (WCC) general secretary Rev. Dr Olav Fykse Tveit reaffirmed churches’ commitment to justice and peace in the Middle East, while stressing the importance of a common vision for living together by Christians and Muslims in the Arab world. 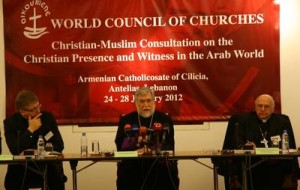 From left to right: Rev. Dr Olav Fykse Tveit, the WCC general secretary; H.H. Catholicos Aram I of the Holy See of Cilicia of the Armenian Apostolic Church; and H.B. Patriarch emeritus Michel Sabbah at the WCC consultation in Lebanon. © Armenian Catholicosate of Cilicia

From the World Council of Churches article – “Without this Christian presence, the conviviality among peoples from different faiths, cultures, and civilisations, which is a sign of God’s love for all humanity, will be endangered,” said Tveit.

He appreciated the participation of a range of Muslims in the consultation, who he says, have emphasized their commitment to strengthen the Christian presence in the Middle East. He said that it is through their action for the common good that people in the Arab world can accomplish peace, justice, freedom and harmony.

“We will certainly want to make clear to our wider constituency, the WCC’s extensive experience over many years of how Christians and Muslims continue to work together constructively for the common good,” he said.

Tveit also pointed out the challenges faced by the Christians in the Arab world, and the sense of insecurity they feel, due to political divides and persistent conflicts.  The WCC has addressed over a number of years the issue of emigration of Christians from the region resulting from the occupation and war in Iraq and the occupation of the Palestinian territories.

He said, “We know that the changes in the Arab world over the last year – and changes still to come – have also left many Christians, along with many Muslims, feeling uncertain and even afraid for their future.”

Highlighting the efforts of churches struggling for justice and peace in Israel and Palestine, Tveit said that the situation is of great concern for Christians in Jerusalem, as well as people of other faiths.

Tveit was speaking at the Christian-Muslim consultation on “Christian Presence and Witness in the Arab World” organized by the WCC programmes for Churches in the Middle East and Inter-religious Dialogue and Cooperation in collaboration with the Middle East Council of Churches.