Working toward a dream

Mary Beth and Bayo Oyebade are ELCA missionaries in Jos, Nigeria. Mary Beth works with Foundations Academy, a small school that focuses on educating orphans, but children from the community also attend. In this entry from her blog “Establish the Work of Our Hands” she describes how the desire to learn can inspire dreams. To support Mary Beth and Bayo, or another of the ELCA’s over 200 missionaries in the global church, go to www.elca.org/missionarysponsorship. 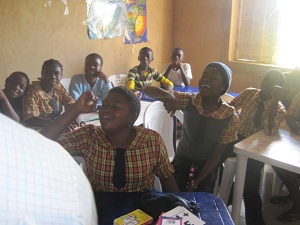 I last saw Frank* as a young child of about 10. His mother sent him to the village to complete his primary school. Later when she heard that we had a school, she brought him back to Jos. He is now 15 years old.

Although Frank has finished sixth grade, I tested him in math and reading in order to determine his grade level. I’ve learned not to simply place children in the next grade level. Unfortunately, he was low in both reading and math, terribly low. Truly, he didn’t even qualify for fifth grade, but I didn’t have the heart to put a 15-year-old lower than that.

I gently broke the news to him, “I’m sorry that I won’t be able to put you in secondary school. You will need to enter fifth grade.” I saw the muscle flinch across his jaw as his eyes looked away. “Go home and tell your mother what I said. I hope to see you back here tomorrow.”

To his credit, he came back the next day and humbled himself to enter the fifth grade.

About a week later, he met the principal and me, and said, “I want you to put me in the third grade.” We were speechless and asked why. He said, “These other students have passed me.” We still encouraged him to press on in the fifth grade.

He tried, but a few days later, he was back with the same request. We compromised and put him in fourth grade.

Frank is making progress through a lot of intensive work in math drilling on basic facts and learning to read through phonics.

Today as I sat with Frank and other older students who are working on their foundations, I asked him: “Do you want to go to the university one day?” With a far-off gleam in his eye, Frank said, “Yes.”