What does faith mean to you?

Christine Eige is an ELCA teaching missionary in Japan. She teaches English as a second language in Tokyo. To support Christine, or another of the ELCA’s nearly 230 missionaries, go to www.elca.org/missionarysponsorship. 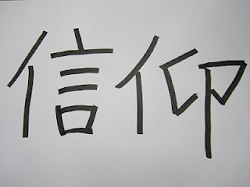 What does faith mean to you?  How would you explain faith?

Recently I wanted to get a glimpse of what faith means to Christians in Japan, so I started by looking at the word itself. Faith in Japanese is shinkou. The first kanji means to believe, and the second kanji means to respect or to look up to someone. In other words, faith is rooted in belief and respect for someone or something. Some people put their faith in money, but when the stock market crashes, they quickly discover how dangerous that can be. Some people put their faith in family or a spouse, but even humans with the best intentions can let us down or disappoint us. There is only one who doesn’t change or disappoint us: “Jesus Christ is the same yesterday, today, and forever” (Hebrews 13:8).

When I started thinking about the kanji for faith, I asked a few teachers in my office for help. (I wanted to make sure that I understood the meaning before I tried to explain it to someone else.) One helpful teacher was Matsumura Sensei because he is a Japanese Christian who teaches English, and he’s an all-around nice guy. He told me about being a part of the school religion club when he was a student. Reverend Fujii told him a powerful acronym to remember the meaning of faith, and decades later, Matsumura Sensei still remembers it.

So, where do you put your faith?  What are you doing and saying today that people will remember decades from now?

One Response to 'What does faith mean to you?'