To cross the river

A swollen river can drown the dream of an education. Such is the case in Nigeria, where Mary Beth and Bayo Oyebade are ELCA missionaries. To support the Oyebades, or another of the ELCA’s over 200 missionaries, go to www.elca.org/missionarysponsorship. 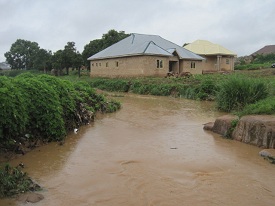 In the rainy season, the river by the school keeps some children from attending.

Our rainy season starts with a few rains in April, and then gathers momentum through May and June. July is even wetter and then it rains nearly every day in August. Even if the sun is shining on an August day, you still need to carry an umbrella. By September the rains will start to slow down and then we can expect just a couple of rains in October. Then dryness will rule the land from November through March.

During the rainy season, the river near our school becomes very swollen. There are a few places with strategically placed stones where people try to cross. When the water is really raging, people have to go far out of their way to cross a bridge and then backtrack.

In recent months we have heard many stories of parents who want their children to come to our school, but they live on the other side of the river. Last Friday two mothers came to find out about the school, and in the process of trying to cross the river, they fell in.

This morning a father came to see the school for the first time. He said, “I wish there was an access road to this place from the other side of the river. A lot of people over there would bring their kids to this school if they could get them safely across the river.”

I said, “Well, next week we’re planning to start building a bridge.”

“You let the people know that now they can bring their kids to school here.”

“I will! I will! You can trust me to do that!” I could see that he had a very exuberant personality and would definitely follow through.

An hour later he was back with his teenage daughter. He enrolled her in the Math Drill which is presently going on, and he is planning to enroll her in school in school by mid-September.