Spoons at the communion table

ELCA missionaries Patrick and Jacqueline Bencke serve at Kyushu Lutheran College, a college of the Japan Evangelical Lutheran Church in Kumamoto, Japan. Jacqueline tells of two interesting traditions at the church they attend and provides a video of young people singing a sacred song. To support the Benckes, or another of the ELCA’s 225 missionaries, go to www.elca.org/missionarysponsorship. 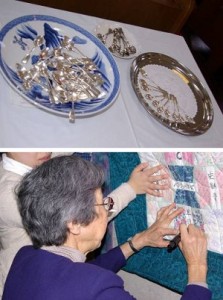 Many people, including fellow Japanese Lutherans, are surprised by the tradition of using a spoon to take the wine for communion at Murozono Church in Kumamoto. This is a tradition that began many years ago and continues today, although I have yet to find a person who knows how or why this custom began. At communion time, instead of intinction or drinking directly from the cup, those taking wine will take a spoon from the silver platter, take a spoonful of wine and then put the used spoon on the ceramic platter.

Another tradition at Murozono Church is that new members of the congregation, either by baptism or by switching their official membership, will write their names on a quilt designed for noting the church members’ names. This tradition was started about 25 years ago and continues today. There are only a few spots left on the quilt to sign, so plans are in place to create an “addition” to the existing quilt.

Finding sacred music with lyrics written by Japanese people, in Japanese, is a large part of my (Jacqueline) work with college students. The Christian music industry in Japan is still embryonic in contrast to the robust nature of the Christian music industry in other countries. However, accessibility to fun, uplifting sacred music, such as the following song called “Mayu,” which means “eyebrow” in Japanese, is slowly becoming more available. The basic tenet of the song is “Don’t let your eyebrow become furrowed (i.e. don’t worry). Jesus is always beside you, abiding in you.” A few of the girls from the chapel choir performed this at a recent chapel service. Watch the video here.

One Response to 'Spoons at the communion table'