Singing and dancing in Sierra Leone

The Rev. Kate Warn is an ELCA missionary in Sierra Leone, serving as a pastor in residence. To support her, or another of the ELCA’s nearly 250 missionaries, go to www.elca.org/missionarysponsorship. 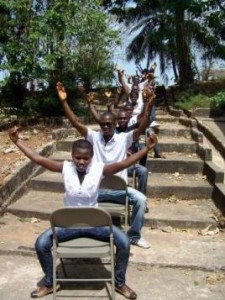 During rehearsal: "Y" for Youth.

Youth of the Evangelical Lutheran Church in Sierra Leone (ELCSL) are dreaming and working toward the goal of producing an album of original music for sale in Sierra Leone and beyond.  Late last year they recorded two tracks for the album and are continuing to raise money for the project.

This past weekend (Feb. 4-5), some of the members of the Lutheran Youth Organization came together to create a music video featuring the theme song and title track of their project.  They sang and danced and had an altogether fun time, at least for the time they spent outside my house in the ELCSL compound. The photo here is but a glimpse of the grace and energy of the Lutheran youth! While I was snapping still shots, Alfred Gorvie was directing and shooting video. He hopes to share the music and the finished video at the Northern Texas-Northern Louisiana Synod Assembly in April.

The theme song has great words, a great tune and invites all hearers to start moving and dancing:  “Let the Lutherans sing we are one in Christ, we are one, oo–ooh we are one!”