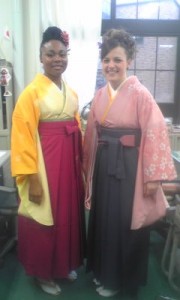 The traditional graduation Hakama style of a kimono.

An update from Carolyn Stypka in Japan:

My dear family and friends,

I am currently perfectly safe down in Kumamoto. I have fellow missionaries and friends living in the Tokyo area and northern parts up to Hokkaido, but all remain accounted for and safe, thank goodness. Here is a link to a blog that a fellow J3 in Tokyo wrote of her experience of earthquake:. http://ally-amerikajin.blogspot.com/

The destruction in some areas is horrific; I am lucky and thankful I was not nearer to the center of it all.

As the destruction, clean-up, and prevention continue here, please keep Japan in your prayers. It, I was especially struck by images of thousands of thousands of people in Tokyo walking home when the trains weren’t running. Over 4 million people were without power in Tokyo. High schools and junior highs were opening their doors to allow stranded people to stay overnight. I just saw coverage of an old man this morning at a school wrapped in a window curtain. He said, “Well, it was cold, and this is all I had to stay warm.”

I am just praying that the situation doesn’t worsen.

There also has been a recent  incident that has been hard on the people of Kumamoto. A 3-year-old girl was reported missing and then found murdered. She was killed in a bathroom of a supermarket not far from my school, and later her body was found in the river. One of the things that surprised me when I first came to Japan, was how independent small children are. It is not uncommon for 4- or 5-year-old children to walk themselves to school, or go to the park alone, or use the restroom in a supermarket. Japan is usually very safe in that regard.

In the meantime, the school year at Luther is nearing the end. We’ve now had three graduation ceremonies — High School, where Jen and I wore the traditional (graduation) Hakama style of a kimono, Junior High, and a special, very touching, service for a High School student. The boy had still not passed all his classes (English reading, I believe…) at the time of his fellow classmates graduation on March 1. His personal service included a message from our principal talking about the different paths people take in life; many of the people present were tearing up.