Pastoral care to the dying on big screen in Japan

Posted on September 15, 2009 by Franklin Ishida 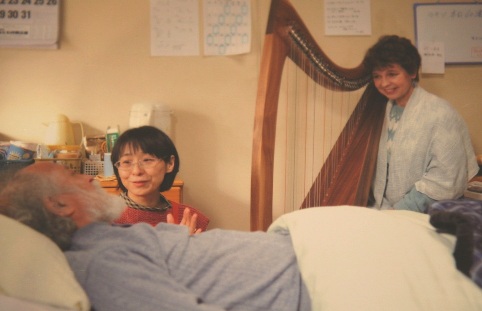 Carol Sack, right, preparing for a scene in the movie

Yoji Yamada is best known in Japan for directing the popular “Tough Being a Man” films, themed on life and lost love. His latest film, inspired by a book written by a Christian who started a hospice, examines the themes of death, dignity, and hope.

Enter Kibo no Ie (House of Hope) and Lyra Precaria. Kibo no Ie is the hospice in Tokyo from the book. Part of its work includes Lyra Precaria, a pastoral harp ministry supported by the Lutheran church in Japan. Through this, a prayerful presence with voice and harp is offered at the bedside of the dying or seriously ill. This is a Japanese and pastoral adaptation of the clinical-musical field of music thanatology.

With Kibo no Ie as the setting for Yamada’s new film, ELCA missionary Carol Sack and her participation in Lyra Precaria, became part of the message. Originally scripted to be in the background, Yamada was convinced that Carol and her harp had to play more of a central role. The scene was changed to have Carol strumming her harp and offering gentle songs to the dying right at the bedside.

Whether the scenes with Carol will make it past the cutting floor in the film edits is unknown. But the gentle ministry she and other Lyra Precaria volunteers offer has made an impact on one of the most prolific Japanese film directors. And this impact continues to happen in real life for those facing death and their families, bringing the hope and joy of God into their lives.