The Rev. David and Alicia Brondos are ELCA missionaries in Mexico. David is a professor at the Theological Community of Mexico, an ecumenical consortium of seminaries in Mexico City, which includes Augsburg Lutheran Seminary. His work involves training pastors and leaders for churches throughout Mexico. Alicia teaches English in Mexico City. To support the Brondos, or another of the ELCA’s 225 missionaries, go to www.elca.org/missionarysponsorship. 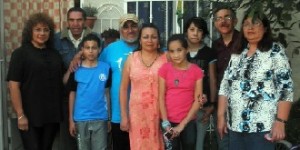 In early June, Alicia and I visited Fernando Tellez (in the cap), one of my online students, along with his family outside of Mexico City, where he has begun a mission outreach from his home.

As of June 20, it has been one year since Augsburg Lutheran Seminary where I serve in Mexico City began offering its program of online courses, of which I serve as coordinator. It has been a very busy time. We have now had more than 150 students sign up for at least one course from just about all of the Spanish-speaking Latin American countries and a dozen states in Mexico, though not all have completed their course work.

About half of the students have come from one of the Lutheran churches in Mexico and other Latin American countries, including especially the Evangelical Lutheran Church in Chile and the United Evangelical Lutheran Church of Argentina, two of the larger companion churches of the ELCA in the region. We also have had students from many other church bodies, including Roman Catholic, Anglican, Protestant and Pentecostal churches. This has included about an equal number of men and women of all different ages, from teenagers to retired people, both lay people and pastors. They also have come from both urban and rural areas.

Most of the students live in places where they have no access to quality theological education. The majority are also unable to study in a seminary because they work or attend a university.

The testimonies of those who have completed the courses have been touching and encouraging. One student, for example, wrote: “Experiences such as those I have had in the two (online) courses I have taken at Augsburg Lutheran Seminary are not simply academic experiences but faith experiences, experiences of conversion and strengthening of my faith. … I feel gratified, renewed and encouraged by this experience. … Thank you to the seminary team for being as much pastors as you are theologians.”