One woman makes her mark

Fred & Gloria Strickert are ELCA Global Mission personnel in Jerusalem where Fred is pastor of the English speaking congregation at the Lutheran Church of the Redeemer. 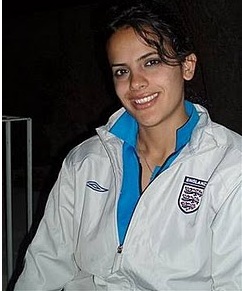 One day about 15 years ago, when we stood watching the boys kicking  around a soccer ball on the old Bethlehem Lutheran School playground (where the Dar Annadwa auditorium now stands), the ball went astray among a group of girls, doing what most 10- to 11-year-old girls would do. Most stepped back to avoid getting hit. But Honey Thaljieh  stepped forward, and with the kick of her foot sent the ball flying, beginning a long journey that would take her around the world on an amazing adventure.

From the Lutheran School playground in Bethlehem, Honey has emerged to revolutionize Palestinian attitudes about women’s sports and has taken up what one might call sports diplomacy, making it all the way to the White House with Hillary Clinton.

In the mid 1990s, when we spent a sabbatical in Bethlehem, Honey’s older sister Amal and our daughter Rachel became the best of friends.

The first intifadah spanned the years when Honey grew from 3 to 8. The second Intifadah corresponded to her late teen-age years. And she experienced some traumatic events living  just a stone’s throw from the Church of the Nativity in Bethlehem — a cousin, Johnny Taljieh, was shot by snipers as he left worship after serving as acolyte.

Honey found strength by faithfully attending church every Sunday, remaining active in Sunday school, youth group, choir, and in the Lutheran School there at the Evangelical Lutheran Christmas Church. And Honey has made the most of it, completing her B.A. in business administration at Bethlehem University and becoming the head of the national sports programs for Palestinian girls and rising as a role model for girls growing up in Middle Eastern society.

Recently when we checked the news online, we saw a Huffington Post story with the headline, “Hillary Clinton Launches Girls Soccer Initiative,” and most of the quotes came from Honey, who was at the White House with other rising international stars.

Honey manages to find a positive spin on …  the restrictive conditions due to the occupation. “We have nowhere else to go and nowhere to put our energies,” she says. “We are just playing with our souls and spiritual abilities. It’s because we are strong, we are Palestinian, we face a lot of difficulties. We want to be something.”

The team is also at a disadvantage in that there are no regulation-sized fields in Bethlehem to practice.  Mostly they practice on the concrete surface handball court at Bethlehem University — a fact that has resulted in numerous knee injuries.  Honey recently threw out her knee and is undergoing rehabilitation.

Honey is the ideal role model for young Palestinian girls. Her “captain” armband is a reminder how she has always been a leader. The Palestinian patch on her jersey brings forth her patriotism and her role as a Palestinian ambassador of goodwill. And most of all, the cross around her neck, both on the field and off, witnesses to her strong Christian faith.

Who would have dreamed such a story when a 10-year-old Honey stepped forward to kick that soccer ball back to the boys on the Lutheran School  playground in Bethlehem?

(For the full story on Honey, go to http://walkinjerusalem.blogspot.com/.)

Next Post: A young person’s view of life in Tanzania »

2 Responses to 'One woman makes her mark'